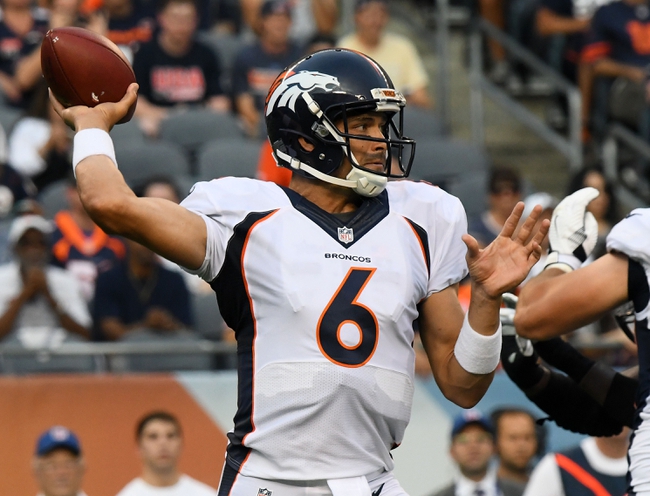 Two teams in the midst of a quarterback battle face off Saturday night as the Denver Broncos host the San Francisco 49ers.

It’s not often that you rack up 409 yards as a team, 302 in the first half, and not win the game. However that’s exactly what happened to the San Francisco 49ers last Sunday. After jumping out to a 13-7 halftime lead, the offense stalled and San Fran wouldn’t score for the rest of the game. Blaine Gabbert stepped in for injured starting quarterback Colin Kaepernick, and was average at best, going 4-10 for 63 yards, although Gabbert did connect with Vance McDonald for a 43-yard TD. San Fran may have found something that works though, as they racked up 236 rushing yards on 34 attempts with 9 different ball carriers. Leading the way on the ground was second-year, South Carolina product, Mike Davis who tallied 72 yards on 5 carries, including a 44 yard scamper. If the 49ers don’t want to replicate last year’s disastrous season, they had better figure something out quick before the rest of the league passes them by.

The Denver Broncos title defense began exactly how they had pictured it, dismantling the bears 22-0 in a convincing road victory.  Projected starter (for now) Mark Sanchez looked like a new man, going 10-13 for 99 yards and a 32-yard touchdown completion to Demaryius Thomas, however that TD was countered with an interception. Backup Trevor Siemian did his best to compete with Sanchez, going 7-12 for 88 yards. Denver’s trademark defense and special teams reared it’s head in the form of a blocked punt that was returned for a TD in the second quarter to basically seal the game in Denver’s favor. Questions were raised by many as to where first-round draft pick Paxton Lynch would fit into the quarterback situation, one would think we will get an answer by this week as to where Lynch stands.

Short and sweet, even with Chip Kelly taking the reigns in San Francisco, I don’t expect the 49ers to do much of anything this year, even in the preseason. Denver has a real battle shaping up for the quarterback position and their defense has already shown up ready to go.

Take Denver to cover with ease.

The pick in this article is the opinion of the writer, not a Sports Chat Place site consensus.
Previous Pick
Houston Texans vs. New Orleans Saints - 8/20/16 NFL Pick, Odds, and Prediction
Next Pick
Top Ten Preseason Week 3 NFL Injuries