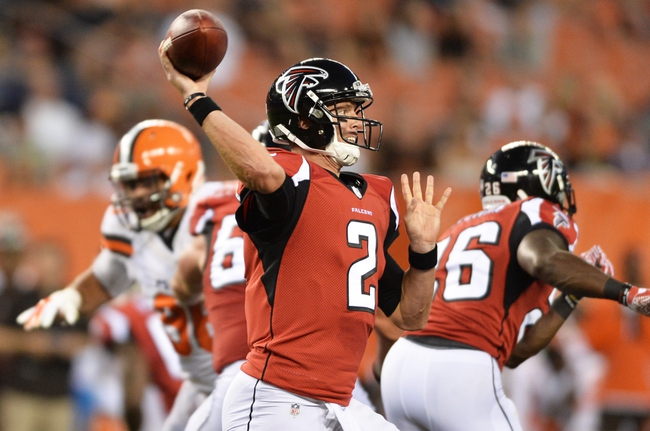 The Atlanta Falcons will make the short trip down I-75 to put their perfect preseason record on the line as they take on the Miami Dolphins in week 3 preseason action on Thursday.

The Atlanta Falcons took care of business on the road, defeating the Cleveland Browns by a score of 24-13 to bring their preseason record to 2-0 Atlanta trailed 13-10 at the half but took control in the second half, holding the Browns scoreless the rest of the way. The Atlanta offense was firing on all cylinders racking up a total of 498 total yards. Matt Ryan looked good in limited action, completing 6 of 11 passes for 78 yards, while backup Matt Schaub completed 8 of 12 for 78 yards as well. The bulk of the passing in the 2nd half went to third-stringer Matt Simms who completed 10 of 13 for 136 yards and a touchdown. The game ball should go to Atlanta’s offensive line who controlled the trenches for the majority of the game, to the tune of a whopping 224 yards on 41 carries. Former Chiefs running back Cyrus Gray led the Falcons in rushing with 76 yards on 18 attempts. Most notably projected starter Devonta Freeman made the most of his 4 attempts, putting up 42 yards and a touchdown. The workload was spread pretty evenly amongst the Atlanta receiving core, with 13 different players recording a catch. Mohammed Sanu, who is expected to fill the void left by Roddy White, hauled in 3 balls for 45 yards. Despite the scoreless second half by the Browns, the Falcons only registered 2 sacks the entire game.

The Miami Dolphins were shellacked by the Dallas Cowboys by a 41-14 scoreline. Miami’s #1 QB Ryan Tannehill saw more playing time than expected, going 12 for 20 for 162 yards and 2 touchdowns. After that, not much else came about, as the second, third and fourth string QB options went a combined 6 for 10 for a puny 55 yards. Isaiah Pead took a step towards competing for the starting running back spot, putting up 48 yards on 4 carries, however if you read the fine print, one of those rushes was for 45 yards. The ground game as a whole seemed to play out pretty well for Miami, putting up 120 yards as a team on 30 carries. Kenny Stills had a big impact on Miami’s side with 3 receptions for 71 yards and both of Miami’s touchdowns on the day. On the whole for the Miami defense, they had no sacks, no interceptions, no forced fumbles, nothing. Hopefully the defense figures out what’s wrong heading into week 3.

I like the way Atlanta has been playing this preseason, and with how Miami got rocked by Dallas, I’m not convinced they’ll be able to do much more against the Atlanta defense which I have ahead of Dallas by a mile and most importantly, we are getting points with the better team, something I’ll take any day.

Give me Atlanta and the points.

The pick in this article is the opinion of the writer, not a Sports Chat Place site consensus.
Previous Pick
BC Lions vs. Ottawa Redblacks CFL Pick, Odds, Prediction - 8/25/16
Next Pick
Seattle Seahawks vs. Dallas Cowboys - 8/25/16 NFL Pick, Odds, and Prediction