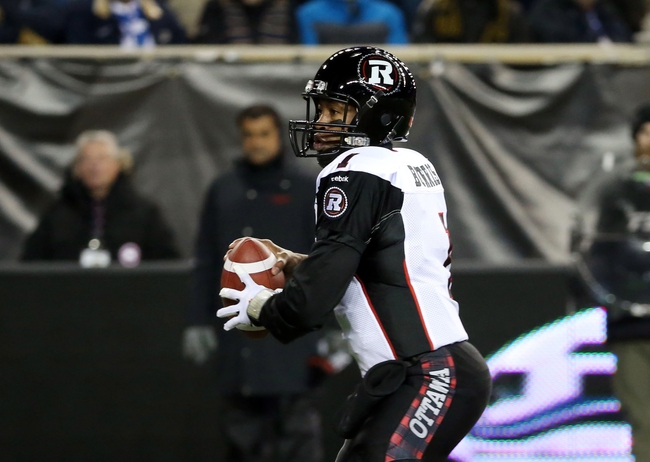 The Line Redblacks -3 -- Over/Under: 56.5 Click to Get Latest Betting Odds

The BC Lions and Ottawa Redblacks play Thursday night at TD Place Stadium on ESPN2.

The BC Lions look for consistency after splitting their last six games. Jonathon Jennings is completing 62.6 percent of his passes for 2,201 yards, 11 touchdowns and five interceptions. Jennings has four passing touchdowns in his last three games. Bryan Burnham and Emmanuel Arceneaux have combined for more than 1,100 receiving yards and six touchdowns while Shawn Gore has 40 receptions. The BC Lions ground game is averaging 92.8 yards per contest, and Jeremiah Johnson leads the way with 309 yards and three touchdowns. Defensively, BC is allowing 26.2 points and 366.2 yards per game. Adam Bighill leads the Lions with 57 tackles, Alex Bazzie has six sacks and Loucheiz Purifoy has one interception.

The Ottawa Redblacks could use a win after losing three of their last four games. Henry Burris is completing 66.7 percent of his passes for 1,132 yards, six touchdowns and five interception. Burris has five touchdown passes in his last three games. Chris Williams and Greg Ellingson have combined for more than 1,300 receiving yards and nine touchdowns while Brad Sinopoli has 43 receptions. The Ottawa Redblacks ground game is averaging 87.9 yards per contest, and Nicholas Grigsby leads the way with 265 yards and one touchdown. Defensively, Ottawa is allowing 26.5 points and 378.1 yards per game. Damaso Munoz leads the Redblacks with 31 tackles, Zack Evans has four sacks and Abdul Kanneh has one interception.

Ottawa has handeled BC rather easily the last two matches and seems to have a tad bit more pep in its step after getting Burris back. Also, the Redblacks are in need of this victory big time after their struggles early. BC has been hit or miss. Give me the home team and small line.

The pick in this article is the opinion of the writer, not a Sports Chat Place site consensus.
Previous Pick
Top Ten Preseason Week 3 NFL Injuries
Next Pick
Miami Dolphins vs. Atlanta Falcons - 8/25/16 NFL Pick, Odds, and Prediction