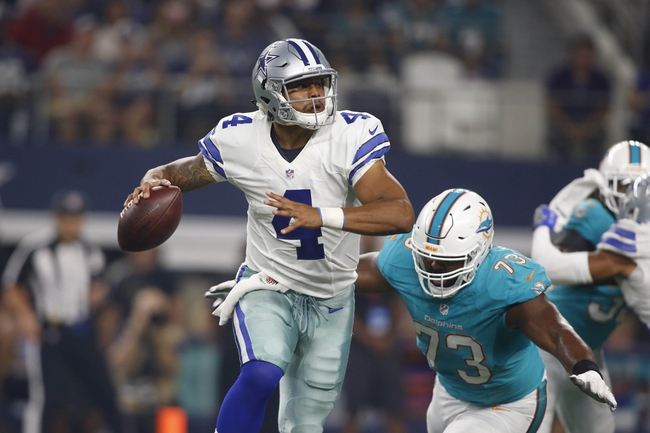 The Dallas Cowboys venture out west to take on the Seattle Seahawks at Century Link Field on Thursday night for some week 3 NFL preseason action.

The Dallas Cowboys rebounded from their week 1 defeat by blowing out the Dolphins 41-14 last Friday to bring their preseason record to 1-1. Cowboys backup QB Dak Prescott definitely stole the show, going 12-15 for 199 yards and 2 touchdowns through the air while also racking up 28 rushing yards on 3 carries and putting up another 2 scores on the ground. Former Redskins running back Alfred Morris got the bulk of the Dallas workload in the backfield, putting up 85 yards on 13 carries and getting into the end zone for a score of his own. The Cowboys spread the wealth to the receiving core, with 11 different players catching a pass. Brice Butler led the way with 3 receptions for 74 yards and one of Prescott’s touchdowns. The Dallas defense ended up getting to the quarterback 3 times with Shaneil Jenkins, Kyle Wilber and Tyrone Crawford each registering a sack.

The Seattle Seahawks come into week 3 also 1-1, dropping a heartbreaker 18-11 to the Minnesota Vikings. Seattle had come back from being 11-0 down to tie the game in the 4th, however a pick-six thrown by backup QB Trevone Boykin with just over a minute to go sealed the Seahawks fate. There was no real standout at the quarterback position for Seattle last Thursday, as no Seattle quarterback completed more than 50% of their passes. Russell Wilson went 5-11 for 77 yards in limited action while the aforementioned Boykin went 10-20 for 127 yards and the late interception. Most of Seattle’s damage was done on the ground as backup hopeful Troymaine Pope made the most of his 10 carries, piling up 86 yards and a touchdown. Christine Michael also made his case for more playing time using his 10 carries to put up 55 yards of his own. Antwan Goodley led all Seattle receivers with 5 catches for 65 yards. The Seattle defense looked mediocre at best, registering only 1 sack the whole night. Even if it was only backups and third-stringers, defensive nights like that won’t get the job done any night.

Getting 5 points with Dallas is a gift, as Seattle has been awful in their first 2 games this preseason and the Cowboys looked like they finally figured it out after week 1.

Give me Dallas and the points, even though I don't think we will need them.

The pick in this article is the opinion of the writer, not a Sports Chat Place site consensus.
Previous Pick
Miami Dolphins vs. Atlanta Falcons - 8/25/16 NFL Pick, Odds, and Prediction
Next Pick
Top Ten Things You Need For the 2016 NFL Season