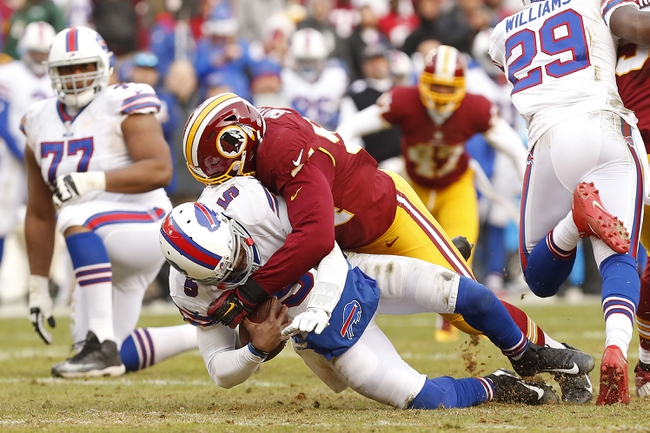 The Washington Redskins and the Buffalo Bills face off on Friday at FedEx Field for a week 3 NFL preseason match up.

The Washington Redskins bounced back from their week one preseason loss to the Atlanta Falcons by pulling off a comeback week against the New York Jets. Redskins starting QB Kirk Cousins didn’t play in week 2 as Colt McCoy has now completed 20 of 29 passes with two touchdowns and an interception and Nate Sudfield has completed 20 of his 35 passes for two touchdowns this preseason. Keith Marshall has been Washington’s leading ball carrier rushing 15 times but gaining just 25 yards while Rob Kelly has 10 carries for 48 yards. Rashard Ross has been the Redskins leading receiver this preseason with 8 catches and 2 touchdowns while Ryan Grant has seven receptions. The Washington defense is allowing 20.5 points per game and 354 yards, some of the worst numbers in the NFL, with 3 sacks, four fumble recoveries, and an interception. Martrell Spaight leads the Redskins with 10 tackles, Deshazor Everett has 7 tackles, and Duke Ihenacho and Will Blackmon each have 6 tackles.  This is likely the last preseason game for the starters and with cuts coming after this game several players will be working for a roster spot.

The Buffalo Bills bounced back from their week one loss to the Indianapolis Colts to dominate and shutout the Giants en route to a week 2 preseason win. The Bills offense is averaging 19.5 points and 357.5 yard per game and they have a plus 2 turnover ratio. Buffalo starting QB Tyrod Taylor ahs completed 9 of his 13 passes with a touchdown while E.J. Manuel is 18 of 31 with 2 touchdowns and Cardale Jones is 17 of 33 with a touchdown and an interception. Johnathan Williams and James Wilder Jr. have seen the bulk of the carries for the Bills with 16 each with Williams scoring a touchdown. Walt Powell leads Buffalo is receptions with seven and Greg Little has five with a touchdown. The Bills defense is allowing 9.5 points and 220 yards per game, near the top of the NFL in preseason with 3 sacks, 2 fumble recoveries, and 2 interceptions. Jerel Worthy leads the Bills with 8 tackles, Preston Brown has 7 tackles, and Brandon Spikes is among those with 5 tackles. We should see plenty of the Bills starters in the early going of this one.

This game looks to be a close one and I feel better starting with the points as they could easily factor in this one.

The pick in this article is the opinion of the writer, not a Sports Chat Place site consensus.
Previous Pick
Winnipeg Blue Bombers vs. Montreal Alouettes CFL Pick, Odds, Prediction - 8/26/16
Next Pick
Tampa Bay Buccaneers vs. Cleveland Browns - 8/26/16 NFL Pick, Odds, and Prediction