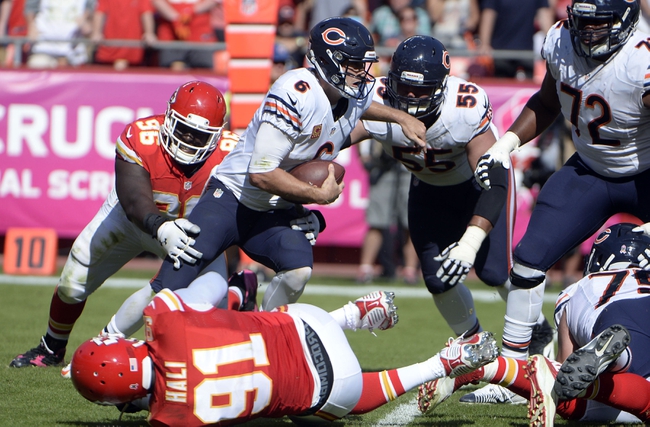 The Chicago Bears and the Kansas City Chiefs face off on Saturday in a week 2 NFL preseason matchup at Soldier Field.

The Chicago Bears are 0-2 thus far in the preseason as the offense has sputtered. The Bears offense has averaged 11 points and 230.5 yards per game with a net zero turnover ratio. Chicago starting QB Jay Cutler has completed 11 of his 16 passes but he has been sacked 3 times while Brian Hoyer is 11 of 24 with two interceptions and Connor Shaw is 6 of 10 with a touchdown. Jordan Howard has 16 carries for Chicago gaining 58 yards while and Jeremy Langford has 12 carries for 62 yards and a touchdown. Josh Bellamy has been the Bears leading receiver with 5 catches and Tony Meoki has 4. The Bears defense is allowing 22.5 points and 358.5 yards per game as the offense has hung them out to dry while they have 6 sacks, 1 fumble recovery, and 1 interception. The Bears starters should see plenty of time together this week so we will get a better idea if this team is as bad as they have looked in the first two weeks.

The Kansas City Chiefs had chances to win both of their first two preseason games but they made mistakes that cost them losing the games by one point each. The Chiefs offense is averaging 18 points and 359.5 yards per game and they have a net zero turnover ratio. Five QB’s have worked for Kansas City this season including Alex Smith, Nick Foles, Aaron Murray, Tyler Bray, and Kevin Hogan. Darrin Reaves has been KC’s primary ball carrier with 17 carries for 74 yards while Spencer Ware has 15 carries for 61 yards and two touchdowns. De’Anthony Thomas leads the Chiefs in receptions with five while Jeremy Maclin has four. The Chiefs defense is allowing 19 points and 311 yards per game with four sacks, a fumble recovery, and an interception. Derrick Johnson leads Kansas City with 7 tackles and Daniel Sorensen and Steven Nelson each have 6 tackles. While these games don’t count it has to be discouraging to the Chiefs that they are losing on their own mistakes.

I haven’t been impressed by either of these offenses and I look for this one to follow the trends and come in under as well.