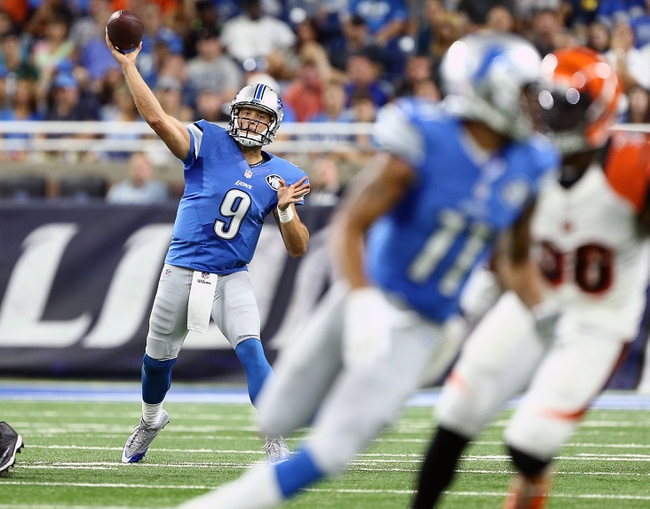 The Detroit Lions take to the road to take on the undefeated Baltimore Ravens in week 3 NFL Preseason action.

The Detroit Lions come into week 3 with a record of 1-1 after dropping a 30-14 home decision to the Cincinnati Bengals last Thursday. Detroit drew first blood with a 24-yard Matt Prater field goal to take a 3-0 lead until Cincinnati stormed back outscoring Detroit 20-3 the rest of the first half, leaving the Lions in the dust the rest of the way. The strange thing for Detroit was that none of their 3 quarterback who played did too badly. Starter Matt Stafford went 8-11 for 113 yards, while backup Dan Orlovsky also completed 8 passes on 14 attempts with an interception, and third-stringer Jake Rudock matched Stafford’s 8-11 but only threw for 90 yards. The Achilles heel for Detroit in the loss was their run game as the Lions rushed for 73 yards on 27 attempts as a team, with Dwayne Washington leading the way with 22 yards on 6 carries and a touchdown. Marvin Jones continued to make an impact in the Lions receiving core, making 4 catches for 65 yards. Detroit’s defense needs to show up in week 3, as the Lions were unable to record a sack, interception or fumble in the loss which brought their total points against to 47 through 2 games.

The Baltimore Ravens improved to 2-0 with a narrow 19-18 victory over the Indianapolis Colts last Saturday. Starter Joe Flacco didn’t see the field against the Colts, meaning backup Ryan Mallett got the start for Baltimore and actually played pretty well, going 6-8 for 47 yards and a touchdown. Third-stringer Josh Johnson saw the majority of the snaps in the second half, going 11-16 for 72 yards and a touchdown. Even though Baltimore didn’t have the best passing game in the world that night, their rush attack came through in a major way, putting up 120 yards on 30 carries with projected starter Justin Forsett putting up a measly 11 yards on 5 carries. The trademark Ravens defense seemed to get an emotional boost from the return of linebacker Terrell Suggs, putting up 2 sacks, and forcing and recovering a fumble, while also using the rare interception return for a 2 point convert to steal the victory for Baltimore.

I’m going to side with Baltimore here, mainly because Detroit scared me away from taking them with how they performed at home last week, so I can only imagine how they’ll do in front of a Baltimore crowd looking for momentum going into the regular season.

Lay the points with Baltimore.