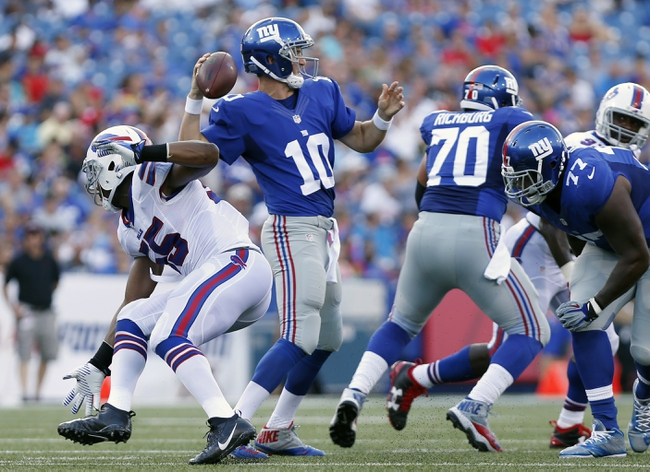 The battle of the Meadowlands takes place on Saturday night as the New York Giants are “hosted” by the New York Jets for the 48th consecutive preseason.

The New York Giants fell to 0-2 after being shut out by Buffalo 21-0 last Saturday. The Giants could get nothing going through the air, as starter Eli Manning struggled, going 4-9 for 44 yards to lead the team. Backup Ryan Nassib wasn’t able to redeem himself after a poor week 1 performance by going 2-12 for 25 yards. On the surface it looks like the G-men had a big game on the ground, but when we delve deeper, of the 102 yards from the 19 attempts, Bobby Rainey’s 67-yard dash meant that Big Blue only put up 35 yards on 18 attempts. Only 1 of the Giants 7 receivers caught more than 1 pass on Saturday night with Odell Beckham Jr’s single 22-yard reception leading the way for New York’s receiving group. The Giants had a busy night on defense however, racing up 3 sacks, an interception and a forced fumble which the Giants also recovered.

The New York Jets dropped to 1-1 after falling to the Redskins by a score of 22-18. Although starter Ryan Fitzpatrick and backup Geno Smith both appeared in the loss on Friday, it was third-stringer Bryce Petty who stole the show for the Jets. The former Baylor quarterback threw for 242 yards on 16-26 passing for 2 touchdowns. The focus was not on the run game for New York as they only racked up 35 yards on 9 carries with Bilal Powell leading the way for the Jets with 23 yards on 3 attempts. Not many people knew who Robby Anderson was going into Friday’s game but they sure knew who he was after his 6 reception, 131 yard and 1 touchdown performance to lead the Jets. Todd Bowles’ defense maintained some sort of presence in the loss, to the tune of 2 sacks and an interception of Redskins QB Colt McCoy.

After seeing what a farce the Giants were in week 2, I have no reason to back them here. All 3 of the Jets quarterbacks are trying to prove they belong including the third-stringer, and when you have everyone playing at their best, it’s hard to stop even if it’s only the preseason. The fact that we are getting points with the better home team makes it a no-brainer for me.

Give me the Jets and the points, even though I’m not sure we’ll need them.