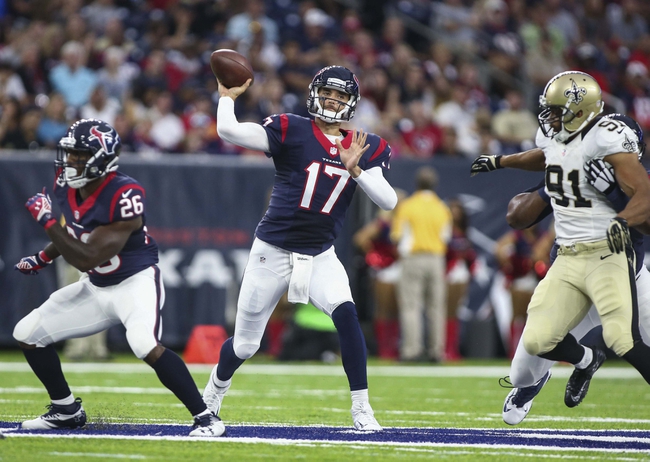 The winless Arizona Cardinals head to Houston to take on the undefeated Texans in week 3 preseason action.

The Arizona Cardinals had things get worst before they got better after dropping a 19-3 decision at the hands of the San Diego Chargers last Friday to fall to 0-2. Nothing ever really got going for the Cards offense, as starter Carson Palmer went 4-8 for 37 yards and an interception, while backup Drew Stanton went only 2-7 for 32 yards and a pick of his own. Third-stringer Matt Barkley got the majority of the 2nd half at quarterback, going 10-15 for 85 yards. The run game didn’t appear to be a priority for Arizona on Friday, using their 21 team carries for a total of 63 rushing yards, with Kerwynn Williams leading the way for Arizona with 19 yards on 2 carries. Arizona did spread the wealth on the receiving end however, with 11 different players ending up with a catch and only one had more than 2 receptions. Leading the way for Arizona was undrafted Clemson product Jaron Brown who caught 2 balls for 40 yards. Arizona’s biggest news from the week was the return of first-round draft pick Robert Nkemdiche, who had been out since late July with a high ankle sprain. Nkemdiche will look to establish a Cardinals pass rush that barely did anything against San Diego, putting up only 1 sack the entire game.

The Houston Texans come into Friday’s game with a 2-0 record after defeating the New Orleans Saints by a score of 16-9 last Saturday. Starting quarterback Brock Osweiler got the majority of the touches in the 1st half, going 12-19 for 124 yards and the team’s only touchdown of the game, while countering that with an interception. A backup battle is brewing between Tom Savage who went 7-12 for 75 yards and Brandon Weeden who completed all 4 of his pass attempts for 54 yards of his own. Houston could’ve had a better day on the ground, putting up only 59 yards on 24 carries with projected starter Lamar Miller using his 6 touches to put up a measly 16 yards. As is the case with most teams this preseason, the Texans also spread the targets amongst their receivers, with 14 different receivers having at least 1 reception, while first-round draft pick Will Fuller led the way for Houston with 4 receptions for 73 yards and a touchdown. The Texans defense suffocated the Saints on Saturday to the tune of 2 interceptions, 2 sacks and 2 forced fumbles all while only allowing 260 yards of total offense to New Orleans.

The Cardinals have stalled in their first two weeks, especially with the first team on the field. However it sounds like the Cardinals are finally going to show some regular season sense of urgency and that’s coming from as high as the GM and even higher. If Arizona is serious about this new found focus, they’ll most likely find the breakthrough this weekend, but I’ll believe it when I see it. Until then, I’m going with the team that hasn’t put up a losing preseason record since 2010 in Houston as I think they’ll put on a better performance with more position battles going on.

Give me Houston in a pick ‘em.