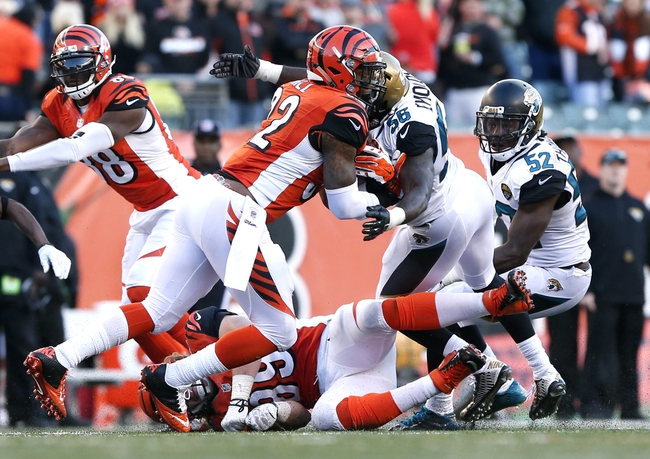 The Jacksonville Jaguars and the Cincinnati Bengals face off on Sunday as they close out week 3 NFL preseason action.

The Jacksonville Jaguars are supposed to be an improved team this season but they have lost their first two preseason games to the New York Jets and the Tampa Bay Buccaneers. The Jaguars offense is averaging 17 points and 312 yards per game and they are minus three in turnover ratio. Jags starting QB Blake Bortles has completed 14 of his 18 passes with two touchdowns while Chad Henne has completed 12 of 19 passes with two interceptions and Brandon Allen has completed 10 of 22 passes with two interceptions. Chris Ivory has led the Jacksonville rushing attack 51 yards and and a touchdown and T.J. Yeldon has 41 yards on just six carries. Allen Robinson is the Jaguars leading receiver with seven catches and Marqise Lee has five catches. Defensively Jacksonville is allowing 22 points and 330.5 yards per game with four sacks, a fumble recovery, and two interceptions. Josh Evans is the Jags leading tackler with 8 tackles and Richard Ash and Hayes Pullard have seven tackles each. Jacksonville has put together a talented roster and we will see them together as a unit in this one.

The Cincinnati Bengals have gone 1-1 in their first two preseason games losing their first game to the Minnesota Vikings and then beating the Lions badly in Detroit. The Bengals offense is averaging 23 points and 315 yards per game and they are plus one in turnover margin. Cincinnati starting QB Andy Dalton has completed 11 of his 14 passes, A.J. McCarron has completed 21 of his 31 passes with two touchdowns, and Keith Wenning has completed 7 of his 13 passes with an interception. Tra Carson and Cedric Peerman have each carried 13 times for the Bengals but Peerman has gained just seven yards. Cody Core has been Cincinnati’s top receiver with six catches, A.J. Green has five catches, and Brandon Tate has four. The Bengals defense is allowing 15.5 points and 311.5 yards with two sacks, a fumble recovery, and three interceptions. Nick Vigil is Cincinnati’s leading tackler with 11 while Marquis Flowers and Clayton Fejedelem each have nine tackles. The Bengals have the longest run of any team in the NFL of making the playoffs but we should have a better idea if they have enough at receiver to keep that run going.

This one belongs to the defense and I look for this one to come in under the total.