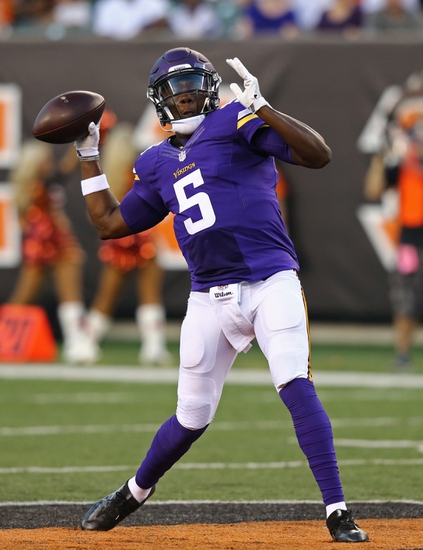 The San Diego Chargers make the long trek North to take on the Minnesota Vikings who look to keep their undefeated preseason record in tact on Sunday.

The Chargers held the Arizona Cardinals to only a field goal in San Diego’s 19-3 victory last Friday. Starting QB Philip Rivers did not play, leaving the snaps to be taken by backup Kellen Clemens and third-stringer Mike Bercovici. Both were surprisingly productive, with Clemens going 11-20 for 134 yards and Bercovici completing 9 of 13 passes for 108 yards. However that’s where the productivity ends in the Chargers backfield, as the running game was non-existent. San Diego only had 46 rushing yards on 27 attempts. Yikes. Projected starter Melvin Gordon had 6 carries for 18 yards to lead the team. The Chargers receiving core had plenty of action, most notably Keenan Allen catching 2 balls for 41 yards and former Packers receiver James Jones hauling in 2 balls for 21 yards of his own. The defense and special teams for San Diego is where all the damage was done. Literally. All of San Diego’s 19 points came from the defense and special teams by way of 4 field goals from Josh Lambo and a 1st-quarter pick-six courtesy of Brandon Flowers.

The Minnesota Vikings bring a perfect 2-0 preseason record into week 3 by way of an 18-11 victory over the host Seattle Seahawks last Thursday. Backup Shaun Hill was good, going 10-17 for 129 yards while third-stringer Joel Stave went 6-14 for 67 yards. The main focus in the backfield was determining strings at the running back position as only 4 Vikings backs got carry reps, combining for 70 yards on 26 carries. The Vikings receiving group also saw a lot of action including tight end Kyle Rudolph who finished with 2 receptions for 54 yards and wide receiver Cordarrelle Patterson who also caught 2 passes for 17 yards. The Vikings defensive unit had quite the busy evening, racking up 5 sacks and an interception courtesy of Marcus Sherels at the expense of Seattle backup Trevone Boykin.

There isn’t much for my to choose between on either side, except of the 4 games combined that the Chargers and Vikings have played this season, 3 have gone under the total.  So I’ll go with the under.

The pick in this article is the opinion of the writer, not a Sports Chat Place site consensus.
Previous Pick
Jacksonville Jaguars vs. Cincinnati Bengals - 8/28/16 NFL Pick, Odds, and Prediction
Next Pick
Top Ten Preseason Week 4 NFL Injuries