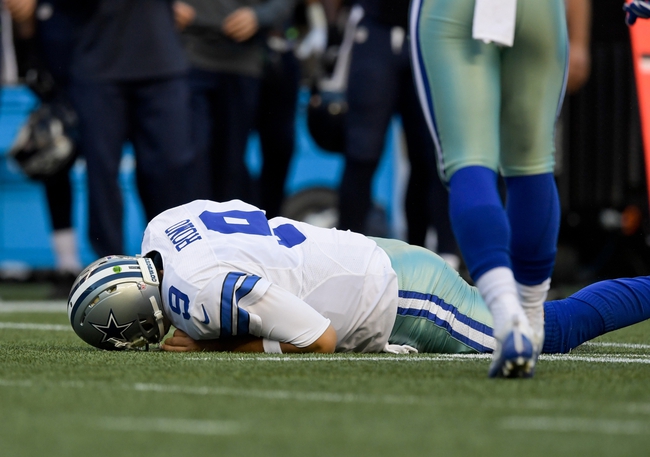 As we enter the final week of the 2016 NFL preseason, injuries continue to mount for some teams. But, hey, that’s football. This morning (as always on Tuesdays) we’re going to take a look at the top ten most impactful injuries of the week.

1. Dallas Cowboys QB Tony Romo fractured his L1 vertebra in Thursday’s contest against the Seattle Seahawks (if this poor guy could go one season without breaking his back) and will be out for the next 6-10 weeks. Enter (the absurdly confident) Dak Prescott. Here we go again, ‘Boys fans..

2. Good news for Green Bay Packers fans this morning with star WR Jordy Nelson fully participating in Monday’s 11-on-11 drills for the first time since last year’s devastating knee injury. It looks like Nelson is on-track to take the field for the team’s Week 1 opener at Jacksonville.

3. Andddd the Indianapolis Colts’ cornerback situation continues its downward spiral with CB Darius Butler exiting Saturday night’s loss to the Philadelphia Eagles with an ankle injury. The severity of the issue isn’t yet known, but no good can come from having seven inactive CBs on your roster.

4. Minnesota Vikings TE MyCole Pruitt sprained his MCL in Sunday’s game and is expected to be sidelined for 2-4 weeks. Pruitt appeared in all 16 games during his rookie season last year.

5. Los Angeles Rams WR Pharoh Cooper injured his shoulder during Saturday’s match-up against the Denver Broncos. According to head coach Jeff Fisher, Cooper is expected to miss “some time” and likely won’t be available for Week 1. On the bright side of things, QB Jared Goff was able to return to practice this week after dealing with a recent back injury.

6. After being sidelined all of last season, New York Giants WR Victor Cruz has fans on high alert. The salsa dancing wideout is currently dealing with a groin injury, but still managed to play 29 snaps against the New York Jets last week. Look for him to be on the field come Week 1.

7. Arizona Cardinals WR John Brown continues to suffer from headaches and remains in the league’s concussion protocol. According to head coach Bruce Arians, however, Brown is making progress and should be able to suit up for the team’s September 11 opener against the New England Patriots.

8. Miami Dolphins DE Cameron Wake did play in Thursday’s win over the Atlanta Falcons, but stated afterwards that his injured Achilles was not at 100%. The team hasn’t yet issued a statement regarding Wake’s official Week 1 status.

9. New York Jets WR Devin Smith, who is still dealing with a nasty ACL tear from late last season, has officially been placed on the PUP list. This comes as no real surprise, but means that Smith will be unavailable to practice or play with the rest of the team for at least the first six weeks of the regular season.

10. Tennessee Titans WR Kendall Wright has been nursing a hamstring injury throughout the preseason, but has publicly stated that he plans to be on the field during Week 1’s game against the Minnesota Vikings.

The pick in this article is the opinion of the writer, not a Sports Chat Place site consensus.
Previous Pick
Minnesota Vikings vs. San Diego Chargers - 8/28/16 NFL Pick, Odds, and Prediction
Next Pick
BC Lions vs. Toronto Argonauts CFL Pick, Odds, Prediction - 8/31/16