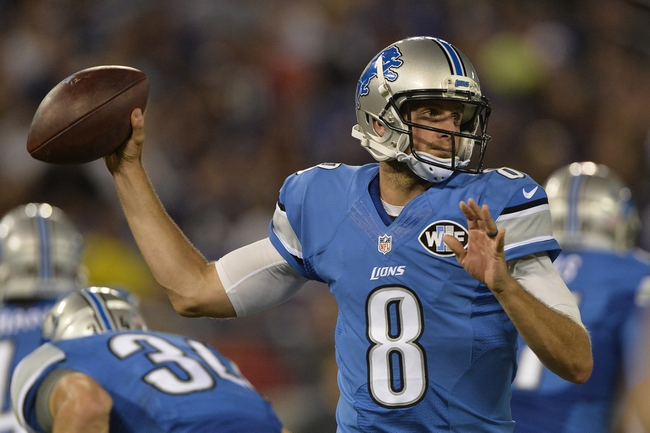 The Buffalo Bills look to finish the preseason with a .500 record after losing to the Washington Redskins. In the 21-16 loss, EJ Manuel led the way with 221 passing yards and one interception. Manuel will get even more reps in this contest with Tyrod Taylor benched. Walter Powell and Daniel Herron combined for 104 receiving yards on 10 catches while Greg Little had three receptions. The Buffalo Bills ground game averaged 3.8 yards per carry and Jonathan Williams led the charge with 42 yards and one touchdown. Defensively, Robert Blanton led the Bills with four tackles, Brandon Deaderick had two tackles for loss and Corey White had two pass deflections.

The Detroit Lions also look to finish with a .500 record after losing to the Baltimore Ravens. In the 30-9 loss, Matthew Stafford led the way with 95 passing yards and one interception. Dan Orlovsky is going to takeover this game with the starters expected to rest. TJ Jones and Golden Tate combined for 58 receiving yards on four catches while Marvin Jones had three receptions. The Detroit Lions ground game averaged 5.3 yards per carry and Theo Riddick led the charge with 35 yards on three carries. Defensively, Antwione Williams led the Lions with six tackles, Haloti Ngata had one sack and Nevin Lawson had one pass deflection.

The one thing I liked about the Bills is that they have a bunch of athletic and playmaking quarterbacks. That comes in handy in games like this one. Considering majority of my preseason picks are based just off the quarterbacks, I have to give the Bills and the free field goal a look.