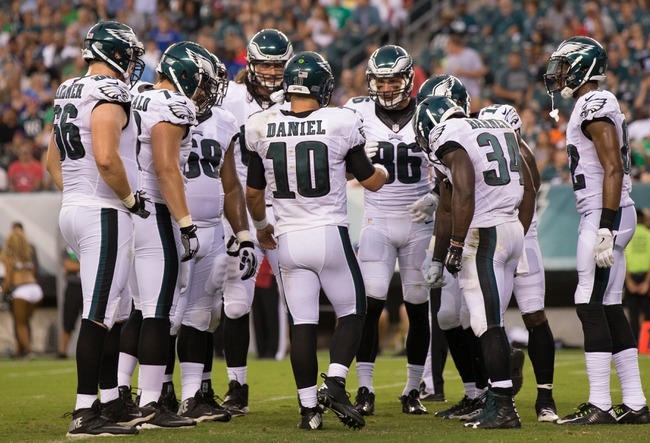 The New York Jets look to finish the preseason with a .500 record after back-to-back losses. In a 21-20 loss to the New York Giants, Christian Hackenberg led the way with 105 passing yards and one touchdown. Geno Smith and Hackenberg should split the bulk of the reps in this contest. Robby Anderson and Zach Sudfeld combined for 97 receiving yards and one touchdown while Jalin Marshall had three receptions. The New York Jets ground game averaged 2.6 yards per carry and Antone Smith led the charge with 30 yards on 13 carries. Defensively, Julian Stanford led the Jets with seven tackles, Calvin Pryor had one sack and Darrelle Revis had one pass deflection.

The Philadelphia Eagles look to finish the preseason with a perfect 4-0 record. In a 33-23 victory over the Indianapolis Colts, Sam Bradford led the way with 167 passing yards and two touchdowns. Backup Chase Daniel is likely going to get the bulk of the reps with the starters out. Josh Huff and Trey Burton combined for 95 receiving yards and one touchdown while David Watford had one reception. The Philadelphia Eagles ground game averaged 5.4 yards per carry and Byron Marshall led the charge with 40 yards on 10 carries. Defensively, C.J. Smith led the Eagles with seven tackles, Bennie Logan had one sack and Malcolm Jenkins had one pass deflection.

The Eagles have done nothing but win games this preseason and have some stability at quarterback in Daniel. There's not much to factor in the last preseason game of the year, but winning kind of trumps everything else. So, give me the Eagles at home and the small chalk.