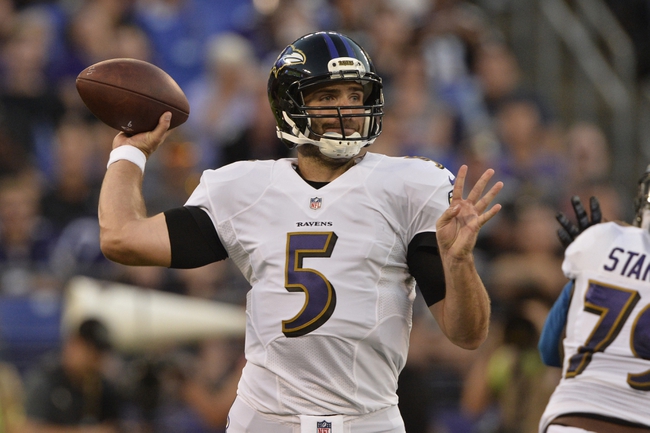 The Baltimore Ravens and the Buffalo Bills face off on Sunday in Baltimore for a week 1 NFL football battle.

The Baltimore Ravens are hoping they can turn it around this season after coming off of a disappointing and uncharacteristic 5-11 season. QB Joe Flacco appears to be healthy again and ready to go while Rayn Mallett was brought in as the backup. In the Baltimore backfield Justin Forsett was injured last season and Buck Allen saw a lot of action but Forsett appears to still be the starter. Mike Wallace was brought in by the Ravens to stretch the defense and Kamar Aiken and Breshard Perriman will look to also put up numbers. The Baltimore defense is hoping the addition of Eric Weddle in the secondary will be a big help and should make them a solid unit with Jimmy Smith and Lardarius Webb. C.J. Mosely and Elvis Dumervil are back at linebacker for the Ravens and they are hoping that Terrell Suggs can come back once again. Baltimore has been strong against the run and they should be once again this year.

The Buffalo Bills are hoping this is the season they finally get over the hump and get to the playoffs. Bills QB Tyrod Taylor appears to have his best supporting cast and the offense should fire. LeSean McCoy anchors the Buffalo rushing attack along with Reggie Bushwhile receivers Sammy Watkins, Robert Woods, and Marquise Goodwin are all playmakers. Defensively the Bills are without Marcell Darius and those are going to be some big shoes to fill. Adelphis Washington appears to have landed a starting job for Buffalo on the defensive line and Kyle Williams will need to be a leader. Bills LB Jerry Hughes saw his sack numbers drop last season and he needs pick it back up while Ronald Darby is one of the best cornerbacks in the NFL. While Rex Ryan is known for defense and he is working with his brother Rob this year, the Bills defense are going to need to hold up their end this season.

I like the Bills offense and while I see the Ravens having the edge on defense this should be a tight game so I will take the points.