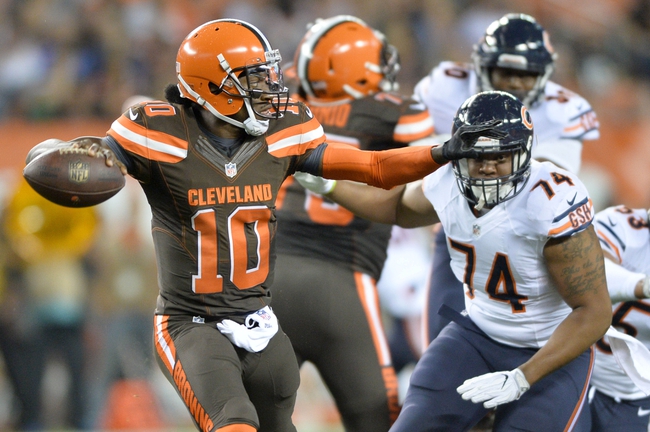 The Cleveland Browns kick off their 2016 NFL regular season by travelling to Lincoln Financial Field to take on the Philadelphia Eagles.

The Cleveland Browns come off of an abysmal 2015 which saw the Browns finish 3-13, which would have earned the team the 3rd overall pick in the 2016 draft, had they not traded it to these same Philadelphia Eagles for multiple picks. Robert Griffin III takes over quarterback duties in Cleveland, in the hopes of undergoing a career renaissance. RGIII has not started a game since 2014, so it will be interesting to see if there is any rust for him coming back. Expect a running back by committee approach in the Browns locker room, as there is no real clear cut number 1 running back on Cleveland’s depth chart, however the front runner appears to be Isaiah Crowell, who will look to build on his 706 yard, 4 touchdown 2015 campaign. The lack of depth in Cleveland’s wide receiving core means lots of looks for 2016 1st round pick, Corey Coleman out of Baylor, who caught 20 touchdowns for the Bears last season. Gary Barnidge will be leaned on heavily this season after being called upon many times last year, to the tune of a 1,000-plus yard season and 9 touchdowns. The Browns defense will look to improve on their brutal 2015 season that saw the team give up 27 points per game, fourth worst in the NFL. It’s probably going to get worst before it gets better for Browns fans as there is a ton of youth on this Browns defense, which is sure to take it’s fair share of beating this season.

The Philadelphia Eagles finished 7-9 last season, good enough for 2nd in the disappointing NFC East, however Philly still missed out on a playoff spot for the 2nd consecutive season. The main question for the Eagles is who will be under center week 1. Philadelphia traded up in the 2016 draft to select North Dakota State product Carson Wentz 2nd overall, the pick that these same Cleveland Browns owned prior to the trade. The Eagles then proceeded to trade journeyman Sam Bradford to the Minnesota Vikings, meaning it would either be Wentz or backup Chase Daniel starting week 1. The assumption is that if Wentz is healed up from his rib injury that was sustained in the preseason, then Wentz will start. Otherwise the ball may be handed to Chase Daniel until Philly get the OK from the medical staff. Ryan Mathews and Darren Sproles are expected to be the Eagles 1-2 punch out of the backfield this season, with Mathews being the ground back and Sproles being one of the best pass-catching running backs in the league. Mathews is ready to take over in Philly after serving as backup to former Eagle Demarco Murray who was traded to the Tennessee Titans. Nelson Agholor looks to improve on what many considered to be a letdown rookie campaign, while Eagles mainstays like Zach Ertz and Brent Celek return to be other options for whoever the Eagles start at QB. The Eagles defense still bolsters notable names such as Malcolm Jenkins, Connor Barwin, Fletcher Cox and Stephen Tulloch just to name a few, however little is expected in terms of improvement for the Eagles on the defensive end, as not much turnover happened in the offseason and it’s not like it could get much worse for a defense that finished in the bottom 3 for most of the defensive categories.

This is a brutal game to try to pick. However after digging deeper, I found that the Eagles have gone 0-6 in their last 6 head coach debuts, while going 1-5 ATS in those games. I’d rather have a QB like RGIII who is looking to impress and has a chip on his shoulder as opposed to having my decision on a starter up in the air. The over may be a better look, but if I had to I’d take Cleveland and the points.