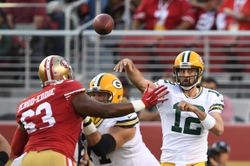 The Green Bay Packers head to Jacksonville to open their 2016 NFL regular season against the Jaguars.

Green Bay is looking to build on a 10-6 record from 2015 that saw the Packers reach the playoffs for the 31st time in franchise history, winning their wild-card matchup against the Washington Redskins before falling to the Arizona Cardinals in the divisional playoffs in overtime. Aaron Rodgers returns for his 9th season as the starting quarterback in Green Bay. Rodgers threw for 3,821 yards in 2015, his lowest amount of total yards in a full season since he became a starter, however 2015 also marked his fifth consecutive season with fewer than 10 interceptions (8), to go along with his 31 touchdowns from last season. The big question mark for the Packers is whether or not Rodgers can have a full season where all of his receivers, such as the likes of Jordy Nelson and Randall Cobb can stay healthy, and if they do, this Packers team can be very scary heading into January come playoff time.

The Jacksonville Jaguars showed some signs of improvement, however they still had a disappointing season as a whole, finishing 5-11, missing the playoffs for the eighth consecutive season. Blake Bortles returns as the starting QB for the Jags, and is looking to further improve on a 2015 campaign that saw him throw for nearly 4,500 yards and 35 touchdowns, but also threw a league leading 18 picks, which is surely the one area Bortles will want to improve the most. With young key pieces such as T.J. Yeldon, Denard Robinson and Marqise Lee leading the way on offense, it’s only a matter of time before Jacksonville has a major breakthrough and this becomes a team to watch out for. Jacksonville’s big problem is their defense that finished in the bottom 10 in the majority of the defensive categories, including second last in points against per game (28 ppg). However with veterans such as Tyson Alualu and pro bowlers like Paul Posluszny to go along with rookie studs like Myles Jack and Jalen Ramsey, it’s pretty safe to say 2016 could be a very interesting year for Jaguars fans.

While the Jags time may come soon, it simply won’t happen in week 1. The Packers are heads and shoulders the better team and should win this game rather handily.