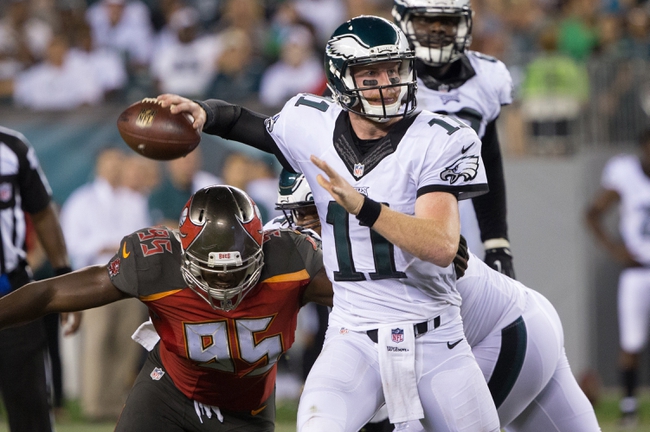 The Philadelphia Eagles and the Cleveland Browns face off on Sunday in week 1 NFL action.

The Philadelphia Eagles are looking for a resurgent season after last year’s resulted in the firing of head coach Chip Kelly. Carson Wentz appears ready to start for the Eagles at QB as Sam Bradford was traded to the Vikings. Philly seems set in the backfield with Ryan Mathews and Darren Sproles while Jordan Mathews is emerging as one of the better wide receivers in the NFL and Nelson Agholor has huge upside. Defensively the Eagles return to a 4-3 under new coordinator Jim Schwartz and this should help this unit. Fletcher Cox anchors the Eagles defensive line while Connor Barwin and Vinny Curry will be counted on to bring some outside heat. Philadelphia linebacker Jordan Hicks is back after an injury shortened season and Mychal Kendricks moves outside in the new scheme while imports Leodis McKelvin and Nolan Carroll have the corners. The Eagles might get worse before they get better which is often the case when a new coach comes in and guts the roster.

The Cleveland Browns have a roster loaded with speed and talent but how that translates to wins remains to be seen. At QB for the Browns it will be a second chance for Robert Griffin III who never came close to living up to the hype when he was drafted in Washington. The Cleveland backfield looks loaded with Isaiah Crowell and Duke Johnson while Terrelle Pryor has looked sharp in his move to receiver and first round draft pick Corey Coleman is a burner. The Browns are young upfront on defense with Danny Shelton and Emmanuel Ogbah and they must play big and at linebacker the Browns appear to have faith in Nate Orchard and they picked up free agent Demario Davis. Joe Haden has been off and on in the Cleveland secondary and they just look very thin and weak at safety. The Browns seem optimistic but they will need to do something on the field before I share that optimism with them.

This seems like a ton of points especially with these teams not being very good so I will take the points with the Browns.