Top Ten Takeaways From Week 1 in the NFL 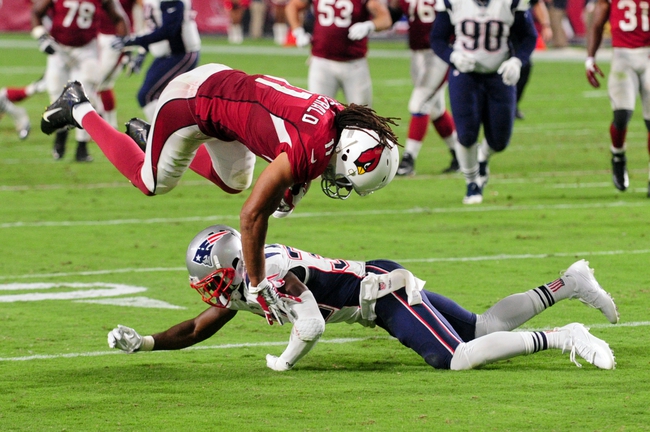 And we’re back! Happy NFL season, guys and gals. This morning (and every Monday until February) we’ll be taking a look at the top 10 takeaways from Sunday’s match-ups. Without further ado, here goes Week 1.

Bill Belichick, as we all know, always seems to find a way to win. This is, after all, the man who turned Jonas Gray into a viable running back. Last night, in spite of many fans predicting an Arizona Cardinals’ blowout win, the New England Patriots managed to start the season 1-0 without Tom Brady, Rob Gronkowski, and Rob Ninkovich. Credit where credit’s due to Jimmy Garopollo and Co. for staying cool under pressure.

2. The Colts’ defense is absolutely decimated.

Not to state the obvious, but the Indianapolis Colts’ D had a rough go of it yesterday. The secondary was already comprised primarily of guys who had been on the roster for fewer than two weeks, and then three more players went down. At one point, the free safety position was filled by the backup to the backup to the backup to the backup. Despite Andrew Luck having an excellent game, the situation for Indy could get dire quickly if the defense can’t get things under control.

As my best friend put it yesterday, “That sentence is hard to process.” It’s been a long time coming for the Jacksonville Jaguars, but it looks like they might finally have a team that can put-up some wins this season. They drafted well, signed solid free agents, and nearly beat the Green Bay Packers (who are, as we all know, perennially good). It could get interesting in the AFC South this season.

Oh, Cleveland Browns, never change. As much as the Jags seem to have improved since last year, the Brownies lost by the largest margin of the day (19 points behind the Philadelphia Eagles), appearing stagnant as ever, despite personnel changes. In other news: RGIII has already sustained a shoulder injury. Really, it’s only to be expected in the city where football dreams go to die. Keep truckin’, Dawg Pound.

5. It’s shaping up to be a competitive year.

Including Thursday night’s kickoff thriller between the Denver Broncos and the Carolina Panthers, there were four 1-point games this week and two 2-point games. This is great news for the league as a whole if it keeps up. Fans want competitive match-ups and, if Week 1 is any indication, their teams are going to deliver in 2016.

6. Jack del Rio might be the league’s gutsiest coach.

In yesterday’s away game against the New Orleans Saints, del Rio decided to go big or go home. Instead of going for the game-tying extra point at the end of the 4th quarter, he opted to go for two….and got it. The Oakland Raiders headed back to NorCal 1-0 and feeling great about where they’re headed this season.

7. The Chargers are doing nothing to help their cause.

Before you say anything, yes, losing Keenan Allen (likely for the season) was a big blow, but to allow the Kansas City Chiefs to launch their biggest comeback win in team history is another matter altogether. If the Bolts really want the fair city of San Diego to give them a new stadium, they’re going to have to start looking like a team that deserves more than Qualcomm.

As of yesterday afternoon, it had been 700 days since Cruz had been on a football field in a regular season game. He was back salsa dancing in the endzone by its conclusion, scoring the go-ahead touchdown to lift his New York Giants over the Dallas Cowboys by a single point. Welcome back, #80. You’ve been missed.

...and everyone else is just living in it. In yesterday’s extremely low-scoring affair against the Miami Dolphins (the score was still 6-3 in the 4th), Wilson took control of the Seahawks’ offense. The former third-round pick threw 26 times during the first half; the most he’s ever passed in two consecutive quarters. Look for Wilson to gain more and more control of his team as the season goes on.

Walsh, you have one job. In what was a textbook continuation of his missed field goal against the Seahawks in the playoffs, Walsh rattled off not one, but two, misses in yesterday’s contest. The 56-yarder was forgivable. The 36-yarder...not so much.

The pick in this article is the opinion of the writer, not a Sports Chat Place site consensus.
Previous Pick
San Francisco 49ers vs. Los Angeles Rams - 9/12/16 NFL Pick, Odds, and Prediction
Next Pick
Week 2 NFL Survivor Pool Picks