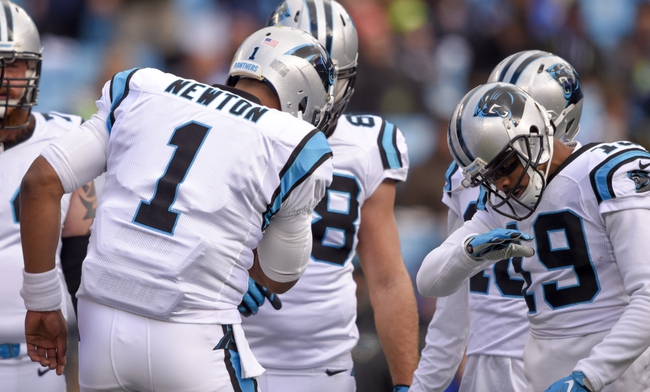 Take a deep breath. The Seahawks and Chiefs barely scraped by but in the world of Survivor Pools it doesn’t matter how much they win by and the majority of you should still be alive after a chaotic first week. Here are this week’s Top Plays, Pool Breakers, and Pool Makers:

This should come as no surprise as the Panthers are the biggest line on the board this weekend and for good cause as they look to bounce back after a season opening defeat by the Denver Broncos. Carolina is playing in their home opener against a Niners side that did win 28-0 against the LA Rams last weekend, but is still very one dimensional as their top receiving threat is Jeremy Kerley who up until last Tuesday was a free agent. Carlos Hyde is solid and Navarro Bowman is a difference maker on defense but this Panthers team is going to be furious after last week and with the reigning MVP playing at home you can be sure they will be out for blood. Add in the fact that Carolina’s defense should have a field day with the San Francisco offense and this game based on talent and circumstance looks like a one sided affair in favour of the reigning NFC Champs.

The Broncos look to move to 2-0 and when it comes to comparing defenses from their week one matchup to their week two matchup it is night and day. The Broncos squeaked out a win at home against the Carolina Panthers and now face the Swiss cheese unit that is the Indianapolis Colts that is coming off a shootout loss to the Detroit Lions in which Matt Stafford tore them apart at will. Indy should be able to move to the ball with some success and could keep this one close for a bit but this is not the same defensive calibre that they faced either and while the Lions have some ability to generate pressure their secondary pales in comparison to Denver’s. Andrew Luck is going to have a tough game here and with CJ Anderson running the ball and a handful of serviceable pass catchers easing things for Trevor Siemian I think this game is leaning in heavy favour to the home side who should move to 2-0 without much trouble.

This one might surprise you a little bit but I am all in on the Oakland Raiders this weekend as they play in their home opener after a gutsy, come from behind win last weekend on the road against the New Orleans Saints. The Raiders secondary did get torched by Drew Brees and both Brandin Cooks and Willie Snead had big games but I think this unit is better served here against a team like Atlanta as Julio Jones is a big body receiver that Sean Smith should have more success against in terms of speed and the other side can match up on Mohammed Sanu. The Falcons have some big time issues on their hands as they try to sort out who their starting running back is going to be and Matt Ryan never plays as well on the road as he does at home. Add in this Raiders offense that was deadly at times last week and match them up with a modest Falcons defense at the Black Hole and this looks like it could be a double digit victory for Oakland.

The Seattle Seahawks have gone from the week one power house play in a number of Survivor circles to on the “do not touch” list this week and while some of that consideration is due to their lackluster effort last week but more so to do with this being a divisional game with a hated rival. The Seahawks looked woeful offensively for the most part last weekend and now they could be without a healthy Russell Wilson who is battling ankle trouble and after a disastrous debut for the new look LA Rams on Monday Night Football they will be out for a much better effort here. Seattle could very well storm into Los Angeles and beat up on the Rams but I just don’t see it happening as this one should be more like an NFC West we have come to expect and the home side always seems to have a bit of an edge in particular in these show downs. Seattle is the better team and they are much better than what we saw last weekend. But the Rams aren’t as bad as we saw either and I think things even out a bit here. Stay away entirely.

This is another one of those divisional show downs that are best to stay away from, but sometimes need a reminder as teams like Green Bay are incredibly enticing to take on a weekly basis. The Vikings defense stole the show last week on the road against the Tennessee Titans and while this Packers offense is light years ahead of that group I think they will be in tough on the road against a divisional foe that has playoff aspirations again this season. The Packers are also trying to get Jordy Nelson going as he had a relatively quiet return despite getting in the end zone and while Eddie Lacy has the makeup of a bell cow he had a quiet debut as well and won’t have a ton of success against a stout Vikings front seven. This looks like a game to stay well away from as I can see it decided by a last second field goal and both teams are certainly primed for better spots to use them in your pool.

We are in a similar situation in this section as we were last weekend and while we almost got burned thanks to the Kansas City Chiefs I am going right back to a divisional game as the Ravens take on the hapless Cleveland Browns. Baltimore was very strong defensively in their season opener against the Buffalo Bills who have a more formidable unit than the Browns do and that was with a healthy Robert Griffin. Cleveland’s offense is now head-manned by Josh McCown and with the stable of running backs battling for time and not much in terms of receivers until Josh Gordon returns I think the Browns are going to continue to get trounced. If Carson Wentz can look like an MVP candidate in his NFL debut I think a Super Bowl winner in Joe Flacco can do the same and I like this Ravens defense a lot more than Philly’s. If you’re looking to preserve some of the big dogs, take the Ravens.

The pick in this article is the opinion of the writer, not a Sports Chat Place site consensus.
Previous Pick
Top Ten Takeaways From Week 1 in the NFL
Next Pick
Buffalo Bills vs. New York Jets - 9/15/16 NFL Pick, Odds, and Prediction