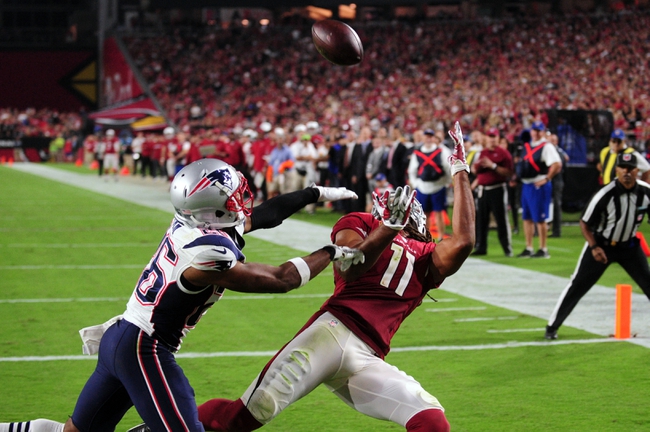 The Arizona Cardinals and the Tampa Bay Buccaneers face off in Week 2 NFL action on Sunday in Arizona.

The Arizona Cardinals starting their season with a disappointing Sunday Night loss to the New England patriots and they are hoping to bounce back here. The Cardinals offense scored 21 points and gained 344 yards and despite not turning the ball over just weren’t effective enough early and it cost them in the end. Arizona QB Carson Palmer completed 24 of his 37 passes for 271 yards with 2 touchdowns but he was sacked 3 times. The Cardinals rushing attack was anchored by David Johnson who gained 89 yards and scored a touchdown while Larry Fitzgerald was the top receiver with 8 catches and two touchdowns and Jermaine Gresham had 4 catches. The Arizona defense allowed 23 points and 363 yards recording 2 sacks and forcing 2 fumbles. Tony Jefferson was the Cardinals top tackler while Tyvon Branch, Tyrann Mathieu, and Kevin Minter each had 7 tackles.  The Cardinals can’t afford home losses if they hope to contend for the NFC West division title.

The Tampa Bay Buccaneers did what they needed to do in week 1 going on the road and getting a win over the Atlanta Falcons. The Buccaneers offense gained 371 yards and turned the ball over just once as they overcame an early deficit to take the lead at the half and never look back. Bucs QB Jameis Winston completed 23 of his 33 passes for 281 yards and four touchdowns with an interception to lead his team to victory. Doug Martin led the Tampa Bay rushing attack with 61 yards and he had 5 receptions while Mike Evans had 5 catches and a touchdown and Vincent Jackson had 2 catches. Defensively the Buccaneers allowed 374 yards and didn’t force a turnover but they did get 3 sacks. Kwon Alexander had a monster game for the Bucs defense with 17 tackles, Chris Conte had 8 tackles, and Lavonte David had 8 tackles. The Buccaneers clearly have their team moving in the right direction but back-to-back road games puts them in a tough spot.