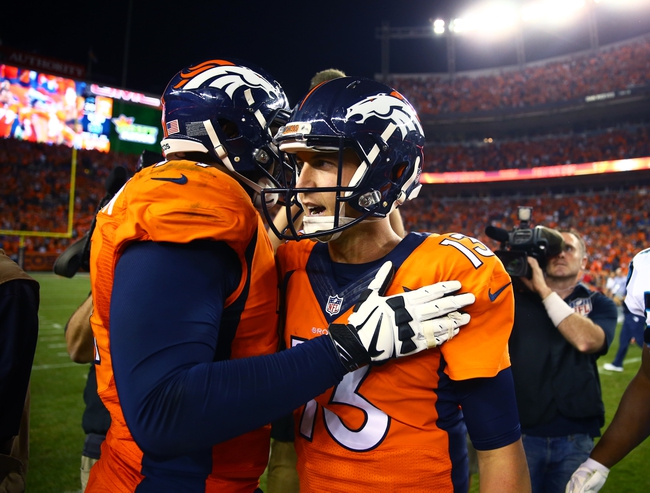 The Indianapolis Colts hope for a bounce back performance losing a home game to the Detroit Lions. Andrew Luck is completing 66 percent of his passes for 385 yards, four touchdowns and zero interceptions. Luck has two or more touchdown passes in six straight games. Phillip Dorsett and T.Y. Hilton have combined for 173 receiving yards on 10 catches while Donte Moncrief has six receptions. The Indianapolis Colts ground game is averaging 82 yards per contest, and Frank Gore leads the way with 59 yards on 14 carries. Defensively, Indianapolis is allowing 39 points and 448 yards per game. Sio Moore leads the Colts with 13 tackles, Erik Walden has one sack and Patrick Robinson has one pass deflection.

The Denver Broncos look for another victory after finding a way to beat the Carolina Panthers last Thursday. Trevor Siemian is completing 69.2 percent of his passes for 178 yards, one touchdown and two interceptions. Siemian enters this game with just 26 career pass attempts under his belt. Emmanuel Sanders and Demaryius Thomas have combined for 97 receiving yards on nine catches while C.J. Anderson has four receptions. The Denver Broncos ground game is averaging 148 yards per contest, and Anderson leads the way with 92 yards and one touchdown. Defensively, Denver is allowing 20 points and 333 yards per game. Todd Davis leads the Broncos with seven tackles, DeMarcus Ware has 1.5 sacks and Chris Harris Jr. has one interception.

The Broncos have had a week and a half to prepare for this game and proved they can still win games behind an elite defense and limited offense. The Colts exploded offensively but couldn't get stops at all defensively and that game was at home. The Colts allowed at least seven points in all four quarters last week. Even with a free touchdown, I'm not sure how anybody can pick Indianapolis with any confidence.

Give me the Broncos to win and get another cover.