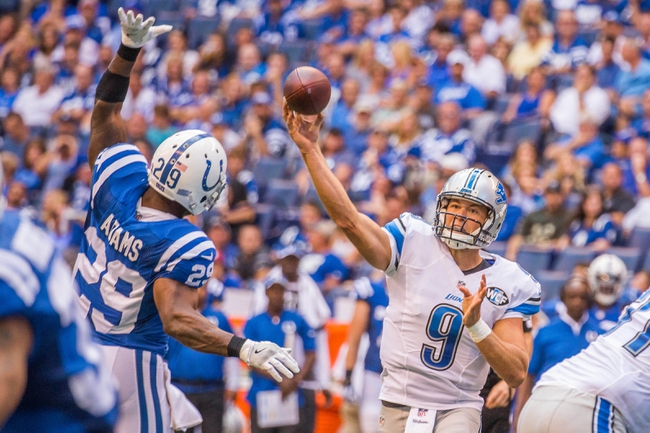 The Detroit Lions and the Tennessee Titans face off at Ford Field in Detroit in a week 2 NFL battle of teams looking to make big improvements this season.

The Detroit Lions looked impressive in week 1 going on the road and beating the Indianapolis Colts and moving the football when they needed to most. The Lions offense gained 448 yards and didn’t turn the ball over but most importantly they drove for the game winning field goal late. Detroit QB Matthew Stafford had a big opening day throwing for 340 yards and 3 touchdowns completing 31 of his 39 passes. The Lions rushing attack was effective as Ameer Abdullah rushed for 63 yards and Theo Riddick rushed for 45 yards and a touchdown each also catching 5 passes and scoring on a catch. Golden Tate was the Lions top receiver with 7 catches, Eric Ebron had 5 catches and a touchdown, and Marvin Jones had 4 catches in his Lions debut. The Lions defense allowed 450 yards and 35 points and had two sacks but couldn’t force a turnover. Tahir Whitehead was the Lions leading tackler with 10 while Quandre Diggs and Devin Taylor had 6 tackles each. The Lions offense looked better than ever but the defense will need to catch up.

The Tennessee Titans looked solid in the first half of their season opener but they turned the ball over plenty in the second half and that was their undoing losing to the Vikings. The Tennessee offense scored 16 points and gained 316 yards but they paid big prices for their turnovers as two were returned for scores. Titans QB Marcus Mariota completed 25 of his 41 passes for 271 yards with 2 touchdowns and an interception and he ran for another 19 yards. Demarco Murray was the Titans top rusher with 42 yards and he had 5 receptions with two going for touchdowns but his fumbles were costly while Tajae Sharp was the leading pass catcher with 7. The Titans defense allowed 301 yards and while it will go down as 25 points against the bulk of those were scored against their offense. Da’Norris Searcy was the Titans top tackler with 8, Avery Williamson had 6, and Kevin Byard had 5. The Titans are hoping to hold onto the ball this week as they outgained their opponent in week 1 and still lost.

Look for this one to be an offensive show and I see it being decided late and this is a solid amount of points to be getting so my play is the Titans.