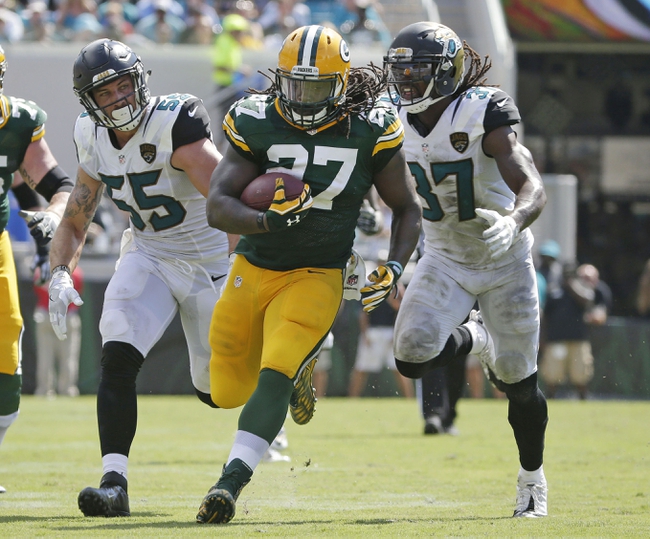 The Green Bay Packers and Minnesota Vikings renew their rivalry for the 112th time as the Vikings play their first home game at U.S. Bank Stadium in week 2 NFL action.

The Green Bay Packers held off a valiant effort from the Jacksonville Jaguars, escaping with a 27-23 victory in week 1. Aaron Rodgers threw for 199 yards on 20 of 34 passing with 2 touchdowns. Eddie Lacy led the Green Bay ground attack with 61 yards on 14 carries. Randall Cobb led the Packers receiving core with 6 catches for 57 yards, while Davante Adams hauled in 3 balls for 50 yards and a score, and Packers mainstay Jordy Nelson caught 6 passes for 32 yards and a score of his own. Defensively, Green Bay was able to get after Jaguars QB Blake Bortles, sacking him twice and forcing an interception and defensive back Ha Ha Clinton-Dix forced a fumble off of wide receiver Allen Robinson.

The Minnesota Vikings got out of the Music City with a 25-16 victory over the Tennessee Titans. Shaun Hill completed 18 of 33 passes for 236 yards, while Adrian Peterson had a disappointing start to his 2016 campaign, using his 19 carries to rack up a measly 31 yards. Stefon Diggs did most of the damage for the Vikings aerial attack, recording 7 completions for 103 yards. The big story for week 2 is the question marks surrounding the quarterback position between week 1 starter Shaun Hill and recently-acquired Sam Bradford, with rumors swirling that Vikings head coach Mike Zimmer won’t even tell the Vikings players themselves who will be starting until game-time on Sunday night. Defensively, the Vikings had a busy day, registering 2 sacks of their own and forcing a pick and a fumble, with Andrew Sendejo and Danielle Hunter each recovering a fumble for Minnesota.

While the Vikings want to start things at their new home with a bang, I simply can’t back them here. No one knows who is starting for Minnesota, and even then, rivalry games are a whole different animal, especially for two quarterbacks who have little experience in the rivalry, unlike Aaron Rodgers. I think Rodgers will be well prepared for this matchup and will spoil the housewarming party for the Vikings.

This low line is a gift, so lay the couple points with the Packers while you still can.