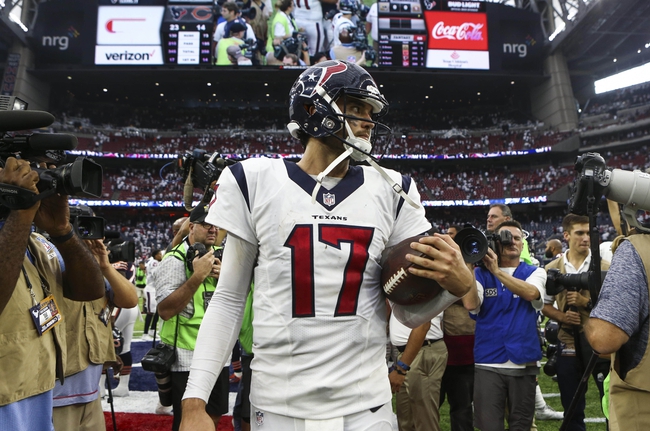 The Kansas City Chiefs hope to build on their miracle comeback victory over the San Diego Chargers. Alex Smith is completing 70.8 percent of his passes for 363 yards, two touchdowns and one interception. Smith has six touchdown passes in his last three regular season games. Spencer Ware and Travis Kelce have combined for 203 receiving yards on 15 catches while Jeremy Maclin has five receptions. The Kansas City Chiefs ground game is averaging 83 yards per contest, and Ware leads the way with 70 yards and one touchdown. Defensively, Kansas City is allowing 27 points and 388 yards per game. Justin March leads the Chiefs with nine tackles, Dee Ford has one sack and Frank Zombo has one pass deflection.

The Houston Texans also look to improve to 2-0 on the season after beating the Chicago Bears. Brock Osweiler is completing 62.9 percent of his passes for 231 yards, two touchdowns and one interception. Osweiler has at least one touchdown pass in four straight regular season games. Will Fuller and DeAndre Hopkins have combined for 161 receiving yards and two touchdowns while Stephen Anderson has three receptions. The Houston Texans ground game is averaging 129 yards per contest, and Lamar Miller leads the way with 106 yards on 28 carries. Defensively, Houston is allowing 23 points and 381 yards per game. John Simon leads the Texans with six tackles, Whitney Mercilus has two sacks and Andre Hal has one interception.

The Chiefs did a good job of making a comeback last week, but it's hard to ignore they were dominated by the subpar San Diego Chargers for three quarters. The Texans looked solid in their opener and have the offensive weapons to push this Kansas City defense around like SD did last week. I like the Texans at home to get the win and the cover of the small line.