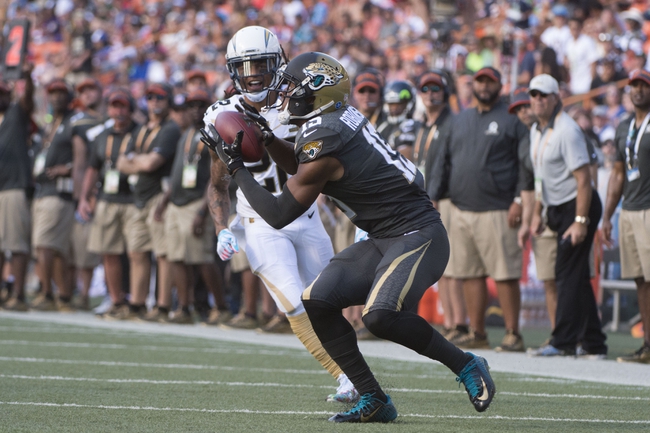 A pair of winless teams try to avoid an 0-2 start when the Jacksonville Jaguars visit the San Diego Chargers in week 2 NFL action.

The Jacksonville Jaguars hung in tough with one of the NFL’s best but ultimately fell to the Green Bay Packers 27-23 in week 1. Blake Bortles completed 24 of his 39 pass attempts for 320 yards however he countered his lone touchdown with an interception. T.J. Yeldon struggled running the ball for the Jags, racking up a mere 39 yards on 21 carries. Allen Hurns led Jacksonville with 75 receiving yards on 4 receptions while tight end Julius Thomas hauled in 5 passes for 64 yards and his first touchdown grab of the season. Jacksonville couldn’t get much going on the defensive side of the ball, registering only 1 sack the entire game, however the one positive from the Jags defensively was their ability to hold the Packers to 294 yards of total offense, good for 6th fewest after week 1.

The San Diego Chargers blew a 24-3 lead halfway through the third quarter en route to a 33-27 overtime defeat at the hands of the Kansas City Chiefs. Philip Rivers connected on 25 of 36 passes for 243 yards and a touchdown. Danny Woodhead was the star out of the Chargers backfield in week 1, putting up 89 yards on 16 carries and hauling in 5 passes for 31 yards and a touchdown, while Melvin Gordon used his 14 carries to rack up 57 yards on the ground. Tyrell Williams led San Diego with71 yards on 2 receptions, however the big blow came when the Chargers lost star receiver Keenan Allen for what appears to be the rest of the season with a torn ACL. San Diego did show signs of life defensively even in defeat, registering 3 sacks and an interception by defensive back Jason Verrett.

I’m going to side with the Jaguars here. Even though Jacksonville has been a brutal road team over the last couple of years, I can’t trust San Diego after they blew that huge lead against the Chiefs, especially against the Jaguars who look to be hungry and are showing signs of improvement.

I have Jacksonville winning this outright, but I’ll take the points just to be safe.