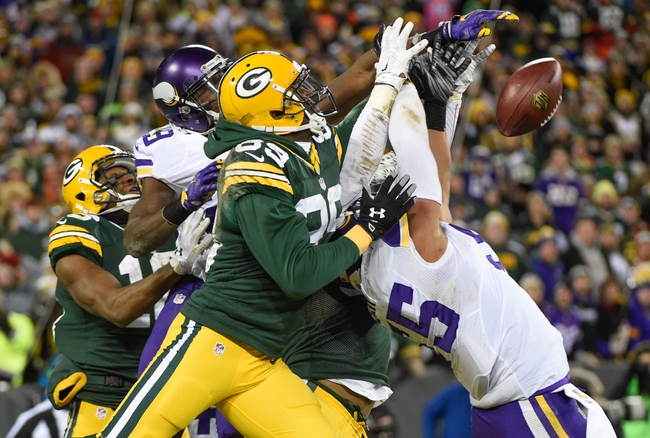 In the Week 2 edition of the NFL’s “Sunday Night Football,” we’ve got an NFC North battle at US Bank Stadium between the Green Bay Packers and the Minnesota Vikings on September 18.

The Packers come in at 1-0 following a too-close-for-comfort win 27-23 over the Jaguars in Jacksonville during Week 1. Aaron Rodgers led the charge for Green Bay here—as usual—throwing two touchdown passes and running in another score. Rodgers would finish 20-of-34 for 199 yards, with his TDs going to Jordy Nelson and Davante Adams. Randall Cobb would lead the receiving corps with six grabs for 57 yards, and Eddie Lacy would add 61 yards on 14 carries in the running game. Green Bay’s defense was solid on the ground, holding TJ Yeldon and Denard Robinson to a combined 46 yards on 24 carries, but showed some flaws against Jacksonville QB Blake Bortles, who had 320 yards and a TD on 24-of-39 passing.

As for the Vikings, they started out slow in Week 1 against the Titans, but would recover for a 25-16 victory in their season opener. The turning point came on defense, when Minnesota forced three turnovers in the span of seven minutes. The Vikings defense also came up with a pair of big sacks. This was a pretty ugly game for Minnesota, who trailed 10-0 at the start of the third quarter. The Titans were keyed in on RB Adrian Peterson, who finished with 19 rushes for just 31 yards. That left the heavy lifting on offense to Shaun Hill, who would log an 18-of-33 line for 236 yards. Stefon Diggs led the team in receiving with seven catches for 103 yards.

The Minnesota offense is pretty one-sided these days, and the Vikings defense won’t be able to stand up to Aaron Rodgers and his big weapons. Green Bay shouldn’t have too many problems here.