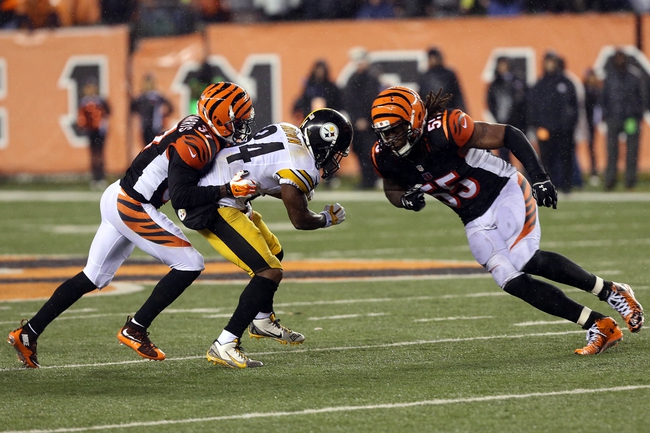 The Pittsburgh Steelers and the Cincinnati Bengals face off on Sunday at Heinz Field in a week 2 NFL battle of unbeaten.

The Pittsburgh Steelers started their season with an impressive win going on the road and making quick and easy work of the Redskins on Monday Night. The Steelers offense looked methodical and nearly unstoppable as they gained 435 yards and put up an NFL nest 38 points on the board. Pittsburgh QB Ben Roethlisberger completed 27 of his 37 passes for 300 yards with three touchdowns and an interception and avoided the pressure all night. DeAngelo Williams had a big night rushing the football for the Steelers gaining 143 yards and scoring two touchdowns and catching 6 passes while Antonio Brown was the top receiver with 8 catches and Eli Rogers had 6 catches. The Steelers defense allowed 384 yards but just 55 rushing yards and had two interceptions and a fumble recovery. Lawrence Timmons was Pittsburgh’s top tackler with 8 while Ryan Shazier, Jarvis Jones, and Sean Davis were among those with 6 tackles. The Steelers now face a short week and are still missing two of their top stars including LeVeon Bell.

The Cincinnati Bengals didn’t play their best football in week 1 but it was good enough to get a one-point win over the New York Jets. The Bengals offense did what it needed to do gaining 381 yards and scored 23 points turning the ball over just once. Cincinnati QB Andy Dalton completed 23 of his 30 passes for 366 yards and a touchdown with an interception. In the Bengals backfield Jeremy Hill rushed for 31 yards and Giovanni Bernard rushed for 25 yards while A.J. Green was the top receiver catching 12 passes for 180 yards including a 54-yard touchdown. Defensively the Bengals allowed 340 yards and 22 points while recording 7 sacks and an interception. Karlos Dansby was the Bengals top tackler with 11 while Vincent Ray and Shawn Williams had 9 each. The Bengals will be looking for revenge after least season’s season ending controversial playoff loss to the Steelers.

I see this as being a close one and while all of the missed extra points and two-point conversions have diminished the significance of getting a half of point off of a key number like we are getting here at 3.5, I just like getting more than a field goal in what should be a very physical game.