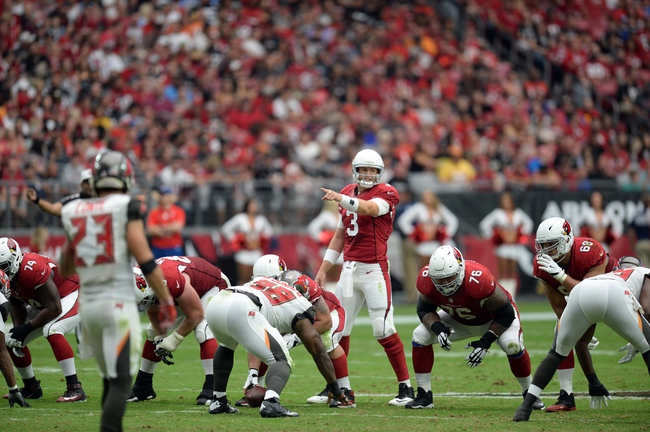 The Arizona Cardinals make the long trek to New Era Field to take on the Buffalo Bills in week 3 NFL action.

The Arizona Cardinals improved to 1-1 with a 40-7 romp of the Tampa Bay Buccaneers. Carson Palmer completed 17 of his 30 pass attempts for 304 yards and 3 touchdowns on the day. Chris and David Johnson split the majority of the workload in the Cardinals backfield, with Chris logging 54 yards and a touchdown on 16 carries, while David followed closely behind with 45 yards on 12 carries. However the main difference between the two was that David Johnson also led the Cardinals in receiving in week 2, logging 3 receptions for 98 yards. I’m left to wonder if Larry Fitzgerald will ever age, as he is just the picture of consistency for Arizona as Fitz caught 5 passes for 77 yards and a touchdown. The Cardinals defense made up for a poor showing in week 1 against the Brady and Gronk-less Patriots, by sacking Bucs QB Jameis Winston 3 times and picking him off on 4 separate occasions, all while allowing just over 300 yards of total offense for the day.

The Buffalo Bills dropped to 0-2 after a 37-31 defeat on Thursday Night football to the New York Jets. The cruel irony of the situation is that the Bills fired their offensive co-ordinator, the day after putting up 31 points on a quality defense like the Jets. Tyrod Taylor completed 18 of his 30 pass attempts for 297 yards, 3 touchdowns and an interception. LeSean McCoy led the Bills with 59 yards on 15 carries while Marquise Goodwin caught his first two passes of the 2016 season for 112 yards and a touchdown to leads the Buffalo receiving core. Greg Salas was not far behind logging 4 receptions for 89 yards and a touchdown of his own. One has to wonder if the injury to standout wide receiver Sammy Watkins hindered his performance in week 2, as Watkins was only able to catch 2 passes for 20 yards. Even with 2 forced fumnles (1 recovered and returned for a Nickell Robey-Coleman toudhdown) and a Lorenzo Alexander sack, the Bills allowed just under 500 yards of total offense in week 2, which ultimately led to their downfall last Thursday.

Both teams disappointed in week 1, so if I have to go off of what I saw in week 2, I have to side with Arizona. Buffalo just fired their offensive co-ordinator, while Arizona appears to be hitting all the right notes and are back on track. Get this line while it’s still low if you can.

Lay the points with the Cardinals.