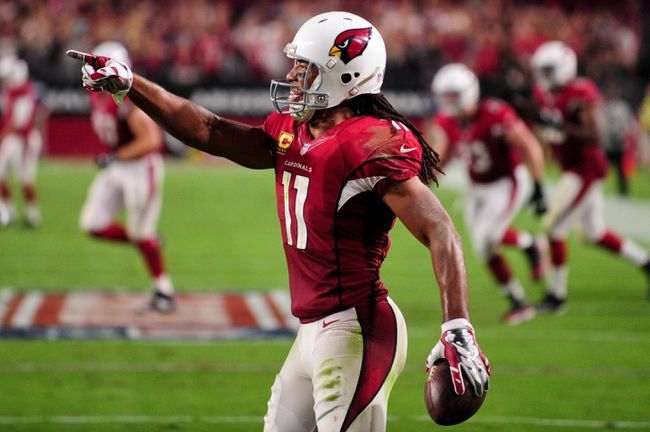 Over at Ralph Wilson Stadium in Orchard Park on Sunday, September 25, we’ve got NFL Week 3 action coming between the Arizona Cardinals and the Buffalo Bills in an inter-conference matchup.

After coming out somewhat flat in their opener, the Cardinals evened things up at 1-1 in Week 2 against the Buccaneers. Arizona dominated Tampa Bay in just about every way in that one, leading to a 40-7 Cardinals win. The defense came up big for Arizona in Week 2, picking off Buccaneers QB Jameis Winston four times. On the other side, QB Carson Palmer led Arizona to an impressive showing with an 18-of-31 line for 308 yards and three touchdowns. David Johnson (who also rushed for 45 yards on 12 carries) led the team with 98 yards on three receptions. The ageless Larry Fitzgerald also had a heavy hand in the Arizona victory, coming up with six receptions for 81 yards and a score. Through two games so far, Palmer owns 579 pass yards with five touchdowns. Fitzgerald has been the Cardinals’ main receiver with 14 receptions on 21 targets for 162 yards and three touchdowns. Johnson, meanwhile, has 134 rush yards alongside 141 pass yards.

As for the Bills, they played against their division rival Jets this last Thursday. Buffalo was thoroughly outplayed in that game, however a few huge plays kept them in the game for most of the evening. In the end, however, Buffalo lost 37-31 and dropped to 0-2 on the year. The Bills defense gave up three touchdowns and 100 yards to Jets RB Matt Forte. On the offensive side, Buffalo QB Tyrod Taylor managed 297 yards with three touchdowns, most coming on WR Marquise Goodwin’s two catches for 112 yards and a TD. Lead Bills RB LeSean McCoy couldn’t find much running room, bagging just 59 rush yards on 15 carries. That gives Taylor 408 pass yards with three touchdowns on the year, with Goodwin’s 112 yards leading the way in receiving for Buffalo. McCoy holds 117 yards on 31 attempts through two games, with one touchdown to his credit.

The line here seems pretty reasonable, considering Arizona’s strong offense and Buffalo’s flat defense through the first couple of games. I’ll take the Cardinals to cover fairly easily in this one.