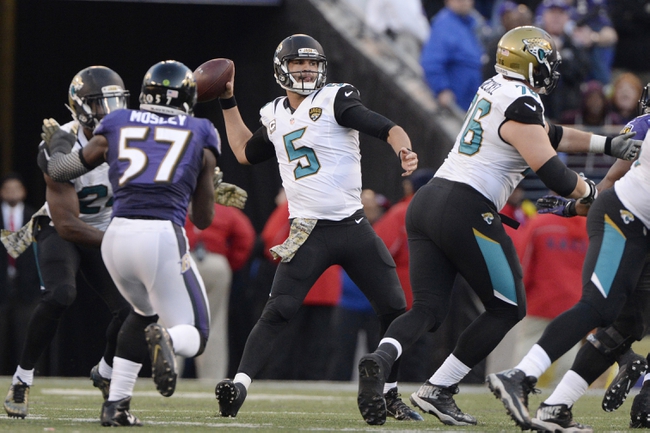 The Jacksonville Jaguars and the Baltimore Ravens face off on Sunday at EverBank Field in week 3 NFL action.

The Jacksonville Jaguars are off to an 0-2 start and are coming off of a one-sided loss at San Diego to the Chargers. The Jaguars offense is averaging 18.5 points and 368 yards per game and they have a minus 3 turnover ratio. Jacksonville QB Blake Bortles has completed 61.8 percent of his passes with 3 touchdowns and 3 interceptions. T.J. Yeldon is the Jaguars top rusher with just 67 yards and a touchdown and he also leads in receptions with 12 while Allen Hurns, Julius Thomas, and Allen Robinson all have 9 receptions. The Jaguars defense is allowing 32.5 points and 325.5 yards per game with two fumble recoveries and 4 sacks. Telvin Smith is the Jags top tackler with 17 and Johnathan Cyprien and Paul Posluszny each have 16 tackles. The Jaguars had expectations of improving this season but so far we haven’t seen it.

The Baltimore Ravens are quietly 2-0 this season and are coming off of overcoming a 20-point deficit to win in Cleveland against the Browns. The Ravens offense is averaging 19 points and 345 yards per game and they have a minus 1 turnover ratio. Baltimore QB Joe Flacco has completed 60.3 percent of his passes with 3 touchdowns and 2 interceptions. Justin Forsett is the Ravens top rusher with 78 yards and Terrance West has 74 yards while Deniis Pitta leads in receptions with 12 while Steve Smith has 8, and Mike Wallace has 7. The Ravens defense is allowing 13.5 points and 273.5 yards per game with 2 interceptions, 1 fumble recovery, and 5 sacks. Zach Orr is the Ravens top tackler with 16, Shareece Wright has 12 tackles, and Eric Weddle has 10 tackles. The Ravens are winning their winnable games and that should keep them in contention for the post season if they can keep winning those games.

Every team that played back-to-back road games in week 2 didn’t win or cover the spread and until I see a team do that I am going to stick on this trend making Jacksonville the play here.