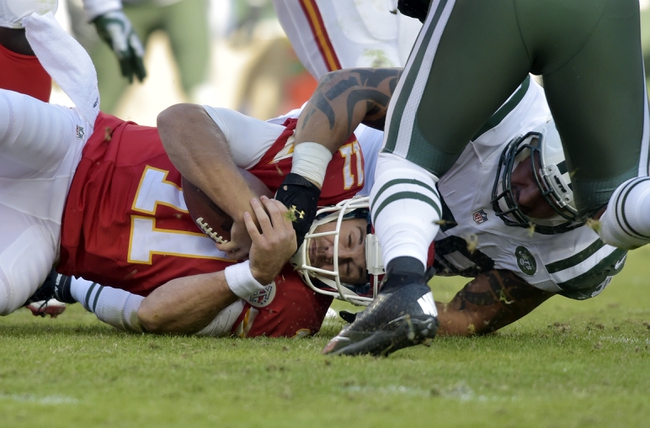 The Kansas City Chiefs and the New York Jets face off on Sunday at Arrowhead Stadium in week 3 NFL football action.

The Kansas City Chiefs are 1-1 this season after falling to the Houston Texans in week 2. The Chiefs offense is averaging 22.5 points and 352 yards per game and they have a minus 2 turnover ratio. Kansas City QB Alex Smith has completed 63.5 percent of his passes with 2 touchdowns and an interception. Spencer Ware has been KC’s primary rusher with 127 yards and a touchdown while Jeremy maclin and Travis Kelce each have 11 receptions. The Chiefs defense is allowing 23 points and 369.5 yards epr game with 2 interceptions and 3 sacks. Justin March-Lillard leads the Chiefs with 17 tackles, Derrick Johnson has 16 tackles, and Frank Zombo has 11 tackles. The Chiefs have been one of the top teams in sacks and turnover ratio over the past few years and those are areas they are lacking in the early going thus far.

The New York Jets enter this game at 1-1 after losing at home to the Bengals and beating the Buffalo Bills on the road in week 2. The jets offense is averaging 29.5 points and 416.5 yards per game with a net 0 turnover ratio. New York QB Ryan Fitzpatrick has completed 62.3 percent of his passes with 3 touchdowns and an interception. Matt Forte is the Jets top rusher with 196 yards and 3 touchdowns while Quincy Enunwa has 13 receptions and Brandon Marshall has 9 receptions. The Jets defense is allowing 27 points and 387 yards per game with 2 interceptions, 1 fumble recovery, and 7 sacks. Leonard Williams leads the Jets with 10 tackles and 2.5 sacks, Darrelle Revis has 10 tackles, and Darron Lee has 11 tackles. The jets are seen as a defensive team but thus far it has been their offense that has been more impressive.

The Chiefs are favored by a field goal and while that looks about right I will take the home team here in what is a lean at best.