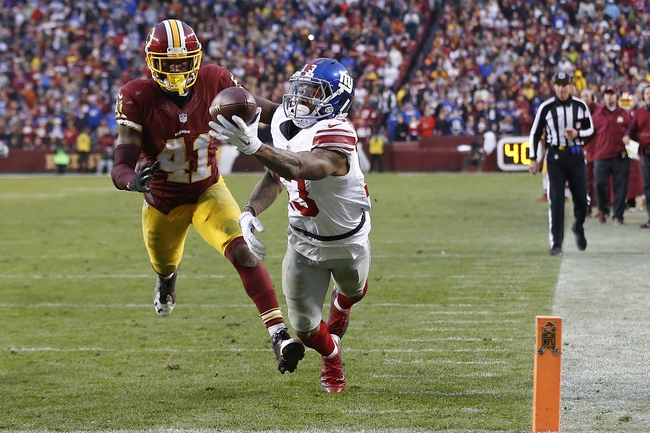 The New York Giants and the Washington Redskins face off on Sunday at MetLife Stadium in week 3 NFL action.

The New York Giants are off to a 2-0 start to the season led by a markedly improved defense. The Giants offense is averaging a 26th ranked 18 points per game and 366.5 yards per game and they have a minus 4 turnover ratio. Giants QB Eli Manning has completed 73.9 percent of his passes with 3 touchdowns and an interception. Rashad Jennings is New York’s top rusher with 102 yards and Odell Beckham is the top receiver with 12 catches, Sterling Shepard has 11 catches, and Victor Cruz has 8 catches.  The Giants defense is allowing just 16 points and 308 yards per game with 2 sacks while not creating any turnovers. Jonathan Casillas leads New York in tackles with 17, Landon Collins has 12, and Eli Apple and Janoris Jenkins each have 11 tackles. New York will need to create turnovers if they hope to keep up their winning play especially as they face stiffer competition.

The Washington Redskins are 0-2 to start the season with both of their first two games taking place at home. The Redskins offense is averaging 19.5 points and 408 yards per game and they have a minus 1 turnover ratio. Washington QB Kirk Cousins has completed 65.2 percent of his passes with 1 touchdown and 3 interceptions. Matt Jones is the Redskins leading rusher with 85 yards and Jordan Reed and Jamison Crowder each have 12 receptions. The Redskins defense has been hung out to dry allowing 32.5 points and 408.5 yards per game with 1 interception, 3 fumble recoveries, and 5 sacks. Mason Foster leads the way for Washington with 24 tackles, Will Compton has 23 tackles, and Bashaud Breeland has 19 tackles. The Redskins are one of the more disappointing teams in the NFL thus far.

This seems like a lot of points for a rivalry game and anything more than a field goal works for the underdog here.