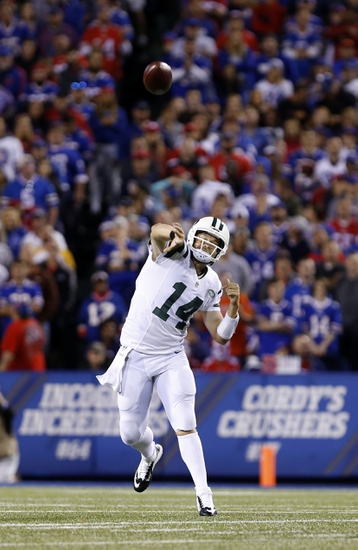 The New York Jets travel to Arrowhead Stadium to take on the Kansas City Chiefs in week 3 NFL action.

The New York Jets found themselves on the right side of a 37-31 shootout, defeating the Buffalo Bills on Thursday Night Football. Ryan Fitzpatrick completed 24 of 34 passes for 374 yards and a touchdown, the third-highest yardage output by any quarterback in week 2. Matt Forte had a phenomenal game, logging 100 yards and 3 touchdowns on 30 carries. Eric Decker led the way for the Jets receiving crew, logging 126 yards and a touchdown on 6 receptions. Brandon Marshall wasn’t far behind Decker, putting up 101 yards on 6 receptions of his own. As is the case in most shootouts, the defense didn’t really show up, as the Jets allowed the Bills to put up almost 400 yards of total offense, they did manage however, to force a fumble and pick off Bills QB Tyrod Taylor courtesy of Jets DB Marcus Williams.

The Kansas City Chiefs fell to 1-1 after dropping a 19-12 road decision to the Houston Texans. Alex Smith had a slower day by his standards, recording only 186 yards on 20 of 37 passing. Charcandrick West led KC with 61 yards on 6 carries while Spencer Ware saw the most action, using his 10 carries to log 57 yards, however Ware also made an impact on the passing game, catching 2 balls for 48 yards. Jeremy Maclin led the aerial assault for the Chiefs, putting up 68 yards on 6 receptions, while Travis Kelce caught 5 passes for 34 yards. The Chiefs had an average day on the defensive side of the ball, they gave up just over 350 yards of total offense to Houston, however sacks by Derrick Johnson and Tamba Hali along with a pair of Marcus Peters interceptions of Houston QB Brock Osweiler balanced it out for the Chiefs in a losing effort.

Arrowhead is one of the toughest places in the league to win on the road, but the Jets have had over a week to rest after playing on Thursday in week 2, so I think they’ll be fresh enough to at least keep it close, if not win outright.

Give me the Jets and the points.