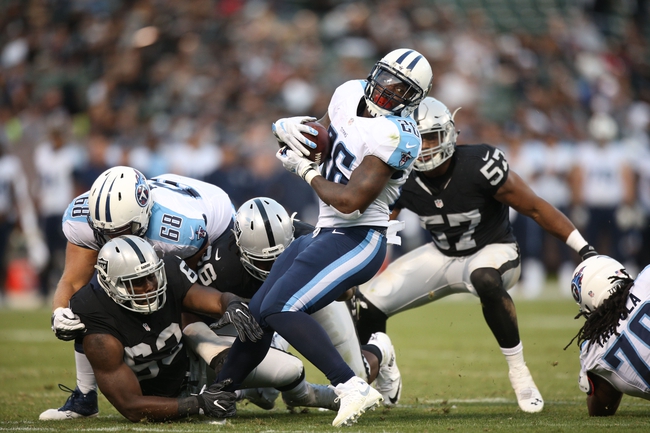 The Tennessee Titans and the Oakland Raiders face off on Sunday in Nashville in week 3 NFL action.

The Tennessee Titans are 1-1 this season after pulling off a come from behind win last Sunday in Detroit against the Lions. The Titans offense is averaging 16 points and 339.5 yards per game and they have a minus 3 turnover ratio. Tennessee QB Marcus Mariota has completed 67.6 percent of his passes with 4 touchdowns and 2 interceptions. DeMarco Murray is the Titans top rusher with 131 yards and he also has 12 receptions while Tajae Sharpe has 11 receptions and Delanie Walker has 9 catches. The Titans defense is allowing 20 points and 338 yards per game with 1 interception and 4 sacks. Da’Norris Searcy and Avery Williamson each have 12 tackles and Jason McCourty has 10 tackles. The Titans beat themselves with turnovers in week 1 but re-established confidence with their win in week 2.

The Oakland Raiders won on the road in New Orleans in week 1 but then lost in their home opener falling to the Falcons. The Raiders offense is averaging 31.5 points and 470 yards per game and they are plus 2 in turnover ratio. Oakland QB Derek Carr has completed 69.9 percent of his passes with 4 touchdowns and an interception. Latavious Murray is the Raiders top rusher with 116 yards and Amari Cooper and Michael Crabtree each have 11 receptions. The Raiders defense is allowing 34.5 points and 517.5 yards per game with 1 interception, 2 fumble recoveries, and 2 sacks. Reggie Nelson is the Raiders top tackler with 20, Malcolm Smith has 14 tackles, and David Amerson and Keith McGill each have 2 tackles. While the Raiders are near the tops in the NFL in offense they are the bottom when it comes to defense and it’s tough to win games if you can’t stop anyone.

I expect to see points on the board in this one and like both Raiders games thus far this year this one goes over the total.