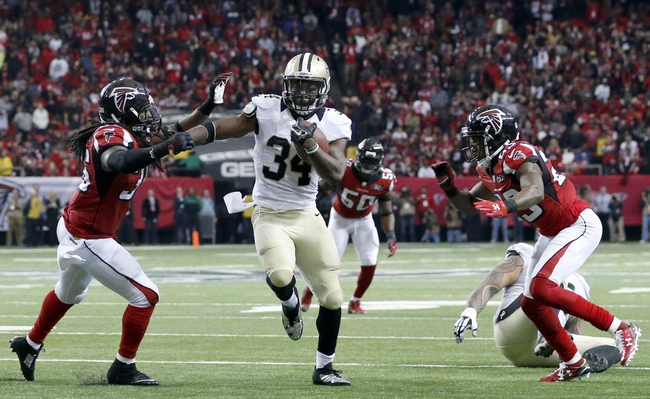 An NFC South rivalry is renewed as the Atlanta Falcons visit the New Orleans Saints on Monday Night Football to close out week 3 of the NFL season.

The Atlanta Falcons improved to 1-1 with a 35-28 road victory over the Oakland Raiders. Matt Ryan put on an offensive clinic, completing 26 of his 34 pass attempts for 396 yards, 3 touchdowns and an interception. The workload was split out of the Falcons backfield, with Devonta Freeman putting up 93 yards on 17 carries, while Tevin Coleman logged 46 yards on his 12 rushes. Julio Jones caught a touchdown for the second straight week while logging 106 yards on 5 receptions for Atlanta, who added to the Raiders dubious honour of having the worst defense against the pass in the NFL through the first 2 weeks. The Falcons weren't much better defensively however, as they were able to record only 1 sack on the day while allowing 454 yards of total offense themselves.

The New Orleans Saints fell to 0-2 by way of a 16-13 defeat at the hands of the New York Giants. Drew Brees completed 29 of 44 passes for 263 yards and a touchdown on the afternoon while Mark Ingram led a Saints running back group that put up a measly 41 rushing yards on 13 carries. Brandin Cooks led the way for the Saints with 7 receptions for 68 yards, while Willie Snead had a good game for the second week in a row, hauling in 5 passes for 54 yards and a touchdown. The Saints defense did their best to keep the team in the game, forcing and recovering all 3 fumbles on the afternoon, while Michael Mauti and Cameron Jordan each recorded a sack of Giants QB Eli Manning.

The trends point to New Orleans, and I'm sure they'll get one down the road but I just don't see it happening this week. Losing back-to-back heartbreakers like that does a number on your psyche, and Atlanta's offense flat out rolled the Raiders in week 2. Sure, New Orleans is one of the hardest places to win on the road, but it's hard not to take Atlanta when we are getting points with the better team.

Give me Atlanta and the points.

The pick in this article is the opinion of the writer, not a Sports Chat Place site consensus.
Previous Pick
Free NFL Picks for Every Game for Week 3 2016
Next Pick
Week 4 NFL Survivor Pool Picks