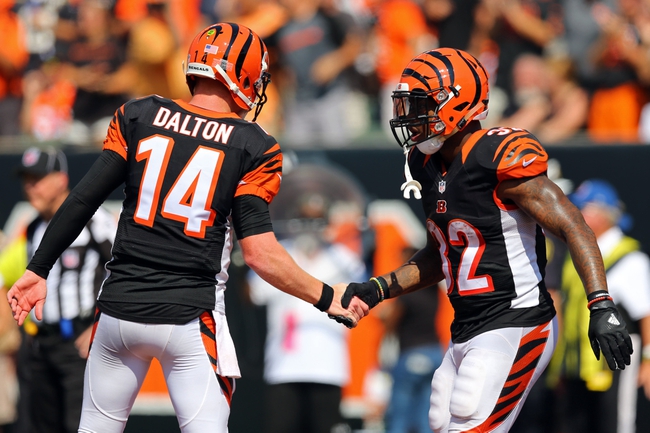 The Miami Dolphins have a chance to get back to a .500 record while picking up their first road win of the season. Ryan Tannehill is completing 64.6 percent of his passes for 892 yards, five touchdowns and four interceptions. Tannehill has two or more touchdown passes in three of his last four games. Jarvis Landry and DeVante Parker have combined for 471 receiving yards and two touchdowns while Kenny Stills has eight receptions. The Miami Dolphins ground game is averaging 83 yards per contest, and Tannehill leads the way with 54 yards and one touchdown. Defensively, Miami is allowing 22.3 points and 415 yards per game. Reshad Jones leads the Dolphins with 31 tackles, Ndamukong Suh has 2.5 sacks and Isa Abdul-Quddus has one interception. Mike Pouncey, Jelani Jenkins and Koa Misi are questionable.

The Cincinnati Bengals haven’t lost three straight games since the 2012 season when BenJarvus Green-Ellis was the lead back. Andy Dalton is completing 65.2 percent of his passes for 938 yards, two touchdowns and two interceptions. Dalton has one or less touchdown passes in five of his last eight games. A.J. Green and Brandon LaFell have combined for 459 receiving yards and one touchdown while Giovani Bernard has 16 receptions. The Cincinnati Bengals ground game is averaging 82 yards per contest, and Jeremy Hill leads the way with 150 yards and three touchdowns. Defensively, Cincinnati is allowing 25 points and 356.3 yards per game. Karlos Dansby leads the Bengals with 22 tackles, Will Clarke has two sacks and Adam Jones has one interception. Mike Nugent, Tyler Eifert and Shawn Williams are questionable.

It's hard to be impressed with either of these teams, as they're both 1-2 and the offense has struggled on both sides. So, laying a touchdown when you add in the lack of rest doesn't make much sense to me. The Dolphins have won the last three games agains the Bengals and Tannehill is actually 2-0 against Dalton in his career with the most recent matchup coming in October of 2013. I'm just not impressed with what I've seen from the Bengals, as even their opening week win against the New York Jets could have easily of been a loss.

I'll take my free touchdown in a game Miami could win outright with the way Cincy has looked out of the gate.