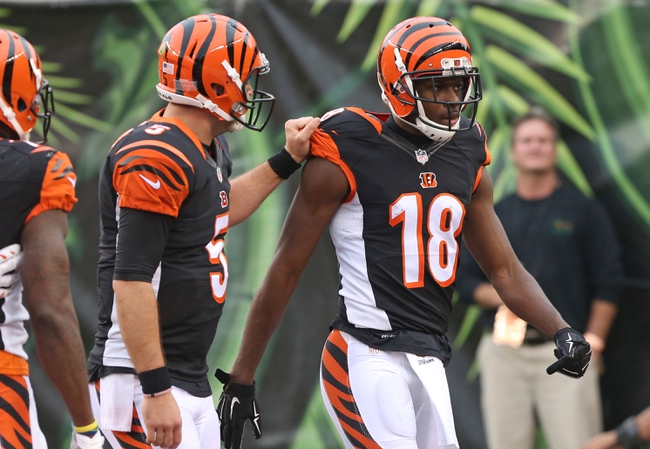 Survivor Pool season continues to increase heart rates and thanks to Cody Parkey ineptitude there are a number of you still alive as a kick at the end of regulation could have spelled the end of Miami’s horrid afternoon. Ultimately, the Fins got the win and a lot of people can breathe easy as we head into week 4. Here are this week’s Top Plays, Pool Makers, and Pool Breakers:

Red flag right away!! I know what you’re thinking. A divisional game and we’re taking the road team? This is usually a must avoid type game but the circumstance of this one badly overtakes the parameters of the survivor rules as I think this one could turn into a bloodbath. The Falcons have been brilliant on offense this season and absolutely atrocious on defense, which is exactly where many expected to see the Dirty Birds coming into the year. The Panthers meanwhile have been excellent on both sides of the ball but are 1-2 thanks to two big efforts from the Denver Broncos and Minnesota Vikings’ respective defenses. However, Cam Newton and the Panthers offense get their best matchup of the season to date and while this may look much more comfortable later in the year when this one is in Charlotte I think the Falcons are dealt a serious dose of reality here against their divisional foes. The Panthers were humbled in a big way last weekend and now they return to the site of their only loss in the regular season last year with a huge chip on their shoulder and a mission to avoid slipping to 1-3? Give me Carolina.

The Bengals get a cupcake matchup here on Thursday Night Football after a tough 1-2 start has them behind the eight ball, but they have been very competitive in all three games this season and could very well be 3-0. The Bengals welcome in the Dolphins who were absolutely atrocious against a very bad Browns team last weekend and if not for Parkey missing two field goals the Fins would have lost and quite frankly, they should have lost. Now, they take to the road to battle a bruising Bengals side that will be out for blood after three tough matchups to start the season against the Jets, Broncos, and Steelers and they are playing in front of their home fans. It is tough sometimes to forecast these Thursday night games but it looks like right now the Dolphins are banged up through the air and that will be their only saving grace here. I like the Bengals to get it done and they are a nice play against a Dolphins side that looked bad last week.

I have hummed and hawed on this game for a long time as the line looks a little too high for a divisional encounter but I just don’t see how the Cards drop to 1-3 with the roster they have. The Rams always seem to play their divisional counterparts tough, at least when it comes to the Seahawks and Cardinals, but are we forgetting that the Rams were absolutely thrashed on opening night against a very soft San Francisco team? Todd Gurley finally got going last week but faces a stiff test here against the Cardinals defense who are looking to avoid a third loss in four weeks and their second straight at home. Arizona was upended by the Bills last week in a game we suggested to stay away from but they are back home here against Case Keenum who should be neutralized with ease and that should allow the Cards to stack the box and keep Gurley at bay as well. David Johnson and the Cards offense need a big game and while I am still weary of this spot to some degree as the Cards haven’t given us much yet I will take Bruce Arians over Jeff Fisher in what is the third divisional matchup in four games to start the season for the Rams.

This was a game I wasn’t sold on when first looking at the schedule and now even more so as the Texans will be without JJ Watt and while his on field presence will certainly be a huge vacancy, I think the energy and morale he brings will be missed even more. The Titans haven’t been blowing anyone away with their offense so far this season and are coming off a seven point home loss to a Raiders team that has the worst statistical defense in football right now but in a divisional game where both teams are going to try and pound the rock I think it’ll be a low scoring affair that could come down to a field goal. The Texans could get an early lead and force the Titans to try and beat them through the air but I think both teams stick to their guns here and use the ground game ot their advantage and let the quarterbacks be the one to make the game deciding plays. In that regard, I don’t trust Brock Osweiler any more than Marcus Mariota so with a wash in a game that figures to be low scoring I’d suggest staying away here.

The dynamic continues in our weekly installments as teams can find themselves in any one of the three sections and one of last week’s auto fades are now into a spot where we think they can cause some headaches. The Browns were a botched field goal away from pulling off the upset on the road against the Dolphins in what was their best game of the season as everyone stepped up in the absence of Robert Griffin and now Josh McCown and while the Skins are at home and are coming off a win against the Giants I just don’t see how you can have any confidence in them right now. The Skins can’t stop the run and the three headed monster of Duke Johnson, Isaiah Crowell, and Terrelle Pryor should have a pretty decent game as they keep the ball out of Cody Kessler’s hands. Washington has also had difficulty getting Matt Jones going on the ground meaning they will rely solely on the aerial attack to put up points and while they should have success I think this one will be a lot closer than expected and I don’t like the Skins in any capacity as a survivor play.

This may seem like a foregone conclusion but the line in this one indicates things are expected to very close and should be a field goal type game. I am not buying it. The Lions are a couple plays away from being 3-0 and really spoiled an effort against the Tennessee Titans and had the Packers reeling at times last week. The Bears meanwhile are an absolute mess and remain on autofade right now as things continue to go from bad to worse, and with what has happened already you would wonder how that could be. While Jeremy Langford struggled in the first three games he is the team’s lead back and now they have to lean on rookie Jordan Howard who will get his first NFL start and while the game is at home I don’t think that bodes well for them here against a pretty sound Lions side. Detroit has the edge in every facet in this game and with Kyle Fuller now joining the infirmary and Jay Cutler, Lamarr Houston, and Danny Trevathan all expected to be out I think the Lions offense has a field day and their defense does enough to make this a pretty easy pick on a flier.