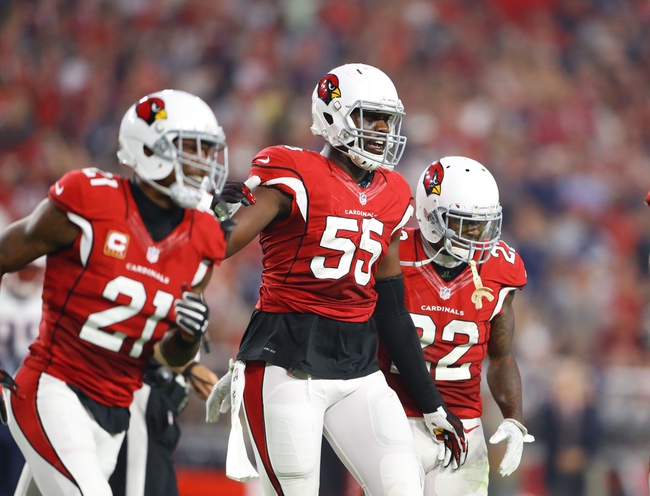 The Arizona Cardinals and the Los Angeles Rams face off on Sunday in Arizona in a week 5 NFL NFC West battle.

The Arizona Cardinals are a disappointing 1-2 this season after losing badly in week 3 to the Buffalo Bills. The Cardinals offense is averaging 26.3 points and 369.3 yards per game and they have a plus 3 turnover ratio. Arizona QB Carson Palmer has completed 57.3 percent of his passes with 5 touchdowns and 4 interceptions. The Cardinals rushing attack is paced by David Johnson who is averaging 4.6 yards per carry with 3 touchdowns and he has 10 receptions while Larry Fitzgerald is the top receiver with 20 catches and 3 touchdowns. Defensively the Cardinals are allowing 21 points and 322 yards per game with 5 interceptions, 4 fumble recoveries, and 9 sacks. Tony Jefferson is Arizona’s top tackler with 30, Tyvon Branch has 21 tackles, and Chandler Jones and Markus Golden each have 3 sacks. The Cardinals appear to be doing a lot right but it hasn’t added up to the right results.

The Los Angeles Rams got of to a disastrous start to the season in week 1 but since then they have won their last 2 games and stand at 2-1. The Rams offense is averaging a 29th ranked 15.3 points and a NFL worst 262.7 yards per game but they are net zero in turnovers. L.A. QB Case Keenum has completed just 53.8 percent of his passes with 2 touchdowns and 3 interceptions and he has been sacked 6 times. Todd Gurley is the Rams top rushing option but he is averaging just 2.9 yards per carry with 2 touchdowns and Kenny Britt is the top receiver with 14 catches and Tavon Austin has 14 receptions as well. The Rams defense is allowing 21 points per game and 366 yards with 1 interception, 5 fumble recoveries, and 4 sacks. Alec Ogletree leads Los Angeles with 29 tackles, Mark Barron has 22 tackles, and Lamarcus Joyner has 21 tackles. The Rams aren’t making it look pretty but they are getting it done and they are playing their 3rd road game in 4 weeks.

This should be a hard hitting game and the Cardinals are clearly the better team and are desperate for a win so I expect the Cardinals to win it but I don’t think it comes easy and I am going to take the points in what is a lean at best.