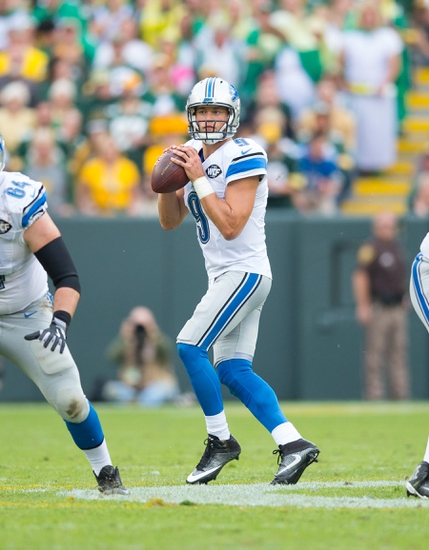 The Detroit Lions head to Soldier Field to take on the Chicago Bears in a week 4 divisional matchup.

The Detroit Lions nearly came all the way back from a 34-17 4th quarter deficit, however they fell just short dropping a 34-27 decision to the Green Bay Packers. Matthew Stafford completed 28 of his 41 pass attempts on the day for 385 yards, 3 touchdowns and 1 interception. Dwayne Washington led the Lions on the ground with 38 rushing yards on 10 carries while Marvin Jones had one of, if not THE best game of his career, hauling in 6 catches for 205 yards and 2 touchdowns, the highest yardage output by any receiver in week 3. The Lions couldn't get much going defensively, as they allowed 34 points and 324 yards of total offense to the Packers, with sacks from Haloti Ngata and Kerry Hyder being the only noteworthy events from the Lions defensively in week 3, they will surely be expecting a better effort against the Bears this week.

The Chicago Bears fell to 0-3 with a 31-17 loss to the Dallas Cowboys on Sunday Night Football. Brian Hoyer completed 30 of 49 pass attempts for 317 yards and 2 touchdowns in his first start as a Bear. Jordan Howard led Chicago on the ground with 45 yards on 9 carries while starter Jeremy Langford carries the ball only 3 times, gaining 30 yards in the process. Zach Miller led the Bears receiving core with 8 receptions for 78 yards and two touchdowns while former pro-bowler Alshon Jeffery caught 5 passes for 70 yards. The Bears were a mess defensively, as they allowed Dallas to rack up 447 yards of total offense to go along with 31 points against, season highs in both categories. The only highlight Chicago had on the defensive side of the ball was a forced fumble by defensive back Jacoby Glenn from Dallas receiver Terrance Williams that was recovered by safety Adrian Amos.

Brian Hoyer stepped in nicely for the Bears in week 3, but that doesn't change the fact that the Bears are an absolute mess. Detroit has some momentum after nearly rallying to tie the Packers last week and they had success against a Packers defense that is miles ahead of Chicago. This low line is a gift, so take it while you can.

Lay the points with Detroit.