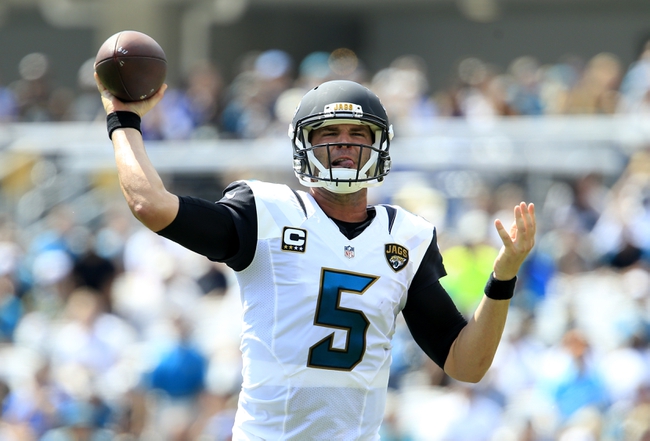 The Indianapolis Colts need a big victory here in order to get back to a .500 record and kind of save their season. Andrew Luck is completing 61.3 percent of his passes for 913 yards, six touchdowns and two interceptions. Luck has two or more touchdown passes in six of his last eight games. T.Y. Hilton and Phillip Dorsett have combined for 445 receiving yards and one touchdown while Jack Doyle has 13 receptions. The Indianapolis Colts ground game is averaging 86 yards per contest, and Frank Gore leads the way with 185 yards and one touchdown. Defensively, Indianapolis is allowing 31.7 points and 401.3 yards per game. Sio Moore leads the Colts with 26 tackles, Erik Walden has three sacks and Antonio Cromartie has two pass deflections.

The Jacksonville Jaguars could also use a victory in hopes of shaking a rough 0-3 start to the season. Blake Bortles is completing 62.2 percent of his passes for 843 yards, five touchdowns and six interceptions. Bortles has thrown 10 picks in his last five games. Allen Robinson and Allen Hurns have combined for 362 receiving yards and two touchdowns while Julius Thomas has 11 receptions. The Jacksonville Jaguars ground game is averaging 55 yards per contest, and T.J. Yeldon leads the way with 84 yards and one touchdown. Defensively, Jacksonville is allowing 28 points and 311.3 yards per game. Paul Posluszny leads the Jaguars with 28 tackles, Dante Fowler Jr. has two sacks and Tashaun Gipson has one interception.

The Jags are a team that's better than their record, but they're still a young team that struggles to finish games and has a quarterback who consistently turns the ball over. The Colts may not be good defensively, but it's easier to trust their offense and assume they're going to put points on the board. Indy has won six of the last seven games against Jacksonville. These trips across the pond can be weird, but the Colts should be able to win and cover the small line.

The pick in this article is the opinion of the writer, not a Sports Chat Place site consensus.
Previous Pick
Pittsburgh Steelers vs. Kansas City Chiefs - 10/2/16 NFL Pick, Odds, and Prediction
Next Pick
Toronto Argonauts vs. Montreal Alouettes CFL Pick, Odds, Prediction - 10/2/16