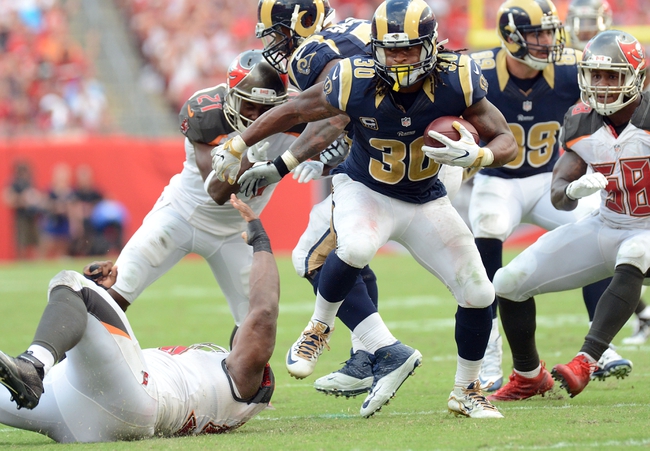 The Los Angeles Rams head to Arizona to take on the Cardinals in an NFC West tilt in week 4 NFL action.

The L.A. Rams got their second straight win by a score of 37-32 over the Tampa Bay Buccaneers to improve to 2-1 on the year. Case Keenum completed 14 of his 26 pass attempts for 190 yards and 2 touchdowns to go along with an interception that was returned for a touchdown. Todd Gurley led the way for the Rams on the ground, recording 85 yards and 2 touchdowns on 27 carries while Tavon Austin led the receiving core with 5 receptions for 82 yards and a touchdown. No to be outdone however, Brian Quick hauled in 2 passes for 53 yards including a 44 yard catch-and-run for a touchdown to open the scoring for the Rams. Defensively, Los Angeles allowed the Bucs to rack up 472 yards of total offense, most of that coming through the air. However Los Angeles did record a pair of sacks from T.J. McDonald and Robert Quinn to go along with a Mark Barron interception and a Ethan Westbrooks fumble recovery that was returned 77 yards the other way for a touchdown for the Rams defense.

The Arizona Cardinals fell to 1-2 after dropping a 33-18 decision to the Buffalo Bills. Carson Palmer completed 26 of his 50 pass attempts for 287 yards, however all of his work was negated with 4 interceptions. David Johnson got the majority of the workload for the Cardinals out of the backfield, logging 83 yards and 2 touchdowns on his 19 carries. John Brown hauled in 6 balls for 70 receiving yards to lead the Cardinals, however right behind Brown were Michael Floyd who caught 4 for 65 yards and mainstay Larry Fitzgerald who pulled in 7 receptions for 60 yards of his own. While the Cardinals didn’t win the day on the defensive side of the ball, they did hold the Bills to under 300 yards of total offense, while racking up 4 team sacks courtesy of Chandler Jones, Kevin Minter, Markus Golden and Tony Jefferson, who also forced a fumble on the afternoon. Patrick Peterson picked off Tyrod Taylor to record his second interception of the 2016 season.

L.A. looks like they’ve finally figured it out offensively, and they have a pretty decent defense all things considered. The Cardinals have done nothing but disappoint for the majority of the first 3 weeks, and in a division game I think this is way too many points to give the Rams.

Give me L.A. and the points.