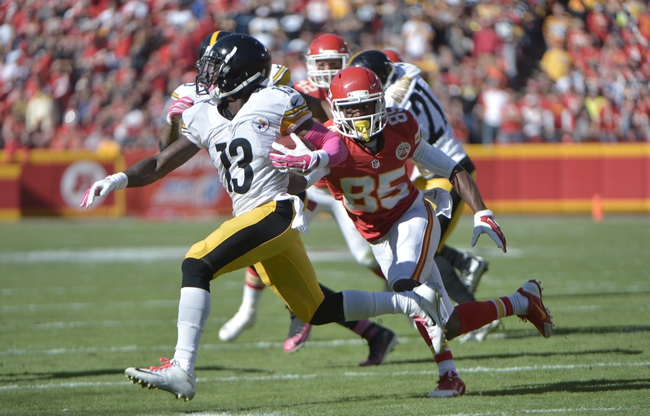 On Sunday, October 2 from Heinz Field, the Kansas City Chiefs and the Pittsburgh Steelers will meet in NFL AFC action for Week 4.

Pittsburgh sits at 2-1 following a surprisingly flat performance against the Eagles in Week 3. Philadelphia took that game 34-3, their defense shutting down anything the Steelers threw their way. Pittsburgh QB Ben Roethlisberger could only muster a 24-of-44 line for 257 yards and an interception, and DeAngelo Williams found no running room with eight carries for 21 yards. Antonio Brown was the Steelers’ only real standout, with 12 receptions for 140 yards.

So far this year, Roethlisberger has given Pittsburgh a 70-of-118 line for 816 yards and six touchdowns, while Williams has totaled 66 rushes for 258 yards and two scores. Brown is far and away the Steelers’ leading receiver on 40 targets, 24 catches, 305 yards and two touchdowns.

Over on the Chiefs’ side, they’re sitting pretty well at 2-1 following a bizarre 24-3 victory over the Jets in Week 3. Kansas City absorbed a whopping eight turnovers in that one, including a half-dozen interceptions. The offense did the rest of the work, with Alex Smith logging a 25-of-33 line for 237 yards and a TD. Travis Kelce was Kansas City’s lead receiver with six grabs for 89 yards and a TD, while Spencer Ware held down the running game with 75 yards on 20 carries.

If you’re looking at Week 3 results, the Chiefs aren’t that good and the Steelers aren’t that bad. Pittsburgh is the type of team that will bounce back from a tough loss, and the Chiefs don’t historically do well in the driver’s seat. I’ll take the Steelers to get a win here.