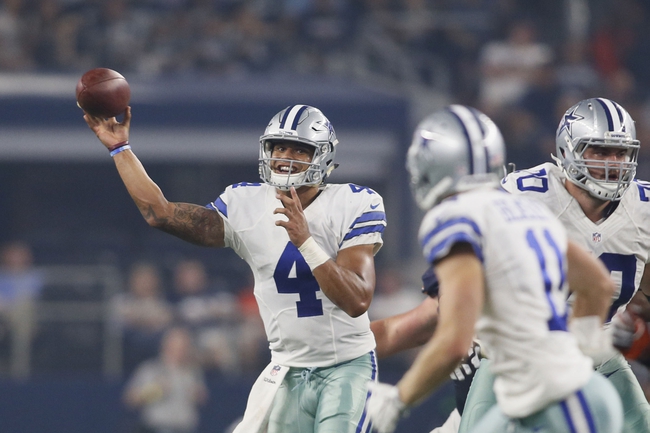 Over at Levi’s Stadium on Sunday, October 2, Week 4 NFL action will be coming our way when the Dallas Cowboys meet the San Francisco 49ers.

Dallas comes into this game at 2-1, following a primetime victory over the Bears 31-17 in Week 3. Dallas was up 24-3 at halftime in that one, but allowed Chicago to claw back into the game. Cowboys QB Dak Prescott had a nice game with a 19-of-24 line for 248 yards and a TD through the air, and another 36 yards and a score off four carries. Ezekiel Elliott controlled the ground game for Dallas with his 30 carries for 140 yards, while Terrence Williams secured four receptions for 88 yards.

So far through three games, Prescott has posted a 66-for-99 mark for 767 yards and one touchdown. Elliott leads the way in the running game for Dallas with his 71 attempts, 274 yards and two scores. Cole Beasley is the high man in receiving with 20 receptions off 25 targets for 213 yards—but still hasn’t found the end zone.

Over on the 49ers’ side, they’re coming in at 1-2 following a Week 3 loss to the Seahawks in Seattle. The only real standout for San Francisco in that one was RB Carlos Hyde, who ran 21 times for 103 yards and a pair of touchdowns. QB Blaine Gabbert was 14-of-25 for 119 yards and an interception, while Torrey Smith led the receivers with three catches for a tepid 35 yards.

Thus far for San Francisco, that gives Gabbert a 53-of-96 line for 532 yards and three touchdowns. Hyde has rushed 58 times for 225 yards and four scores, while Jeremy Kerley leads the receiving corps with 12 receptions on 23 targets for 114 yards.

San Francisco looked good in the opening week, but that’s because they were playing the Rams. Since then the Niners haven’t shown us much, and it’s doubtful they’ve got the talent to repel the Cowboys here. I’ll take Dallas for the victory.