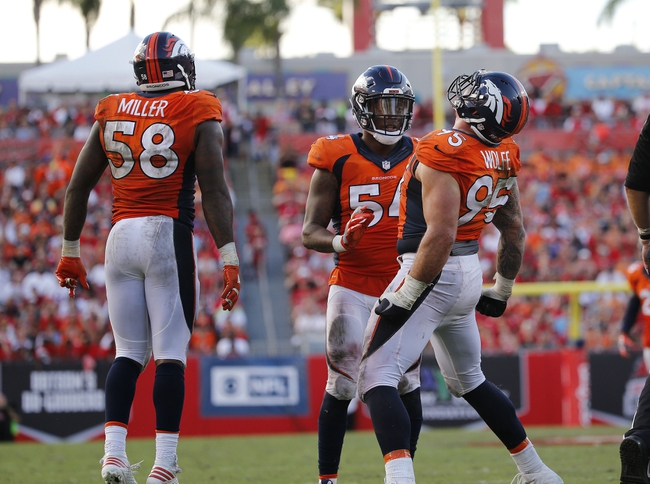 The Denver Broncos look to stay undefeated as they welcome the Atlanta Falcons to town in one of the more anticipated matchups on the week five schedule.

The Atlanta Falcons bring their high flying offense into Mile High on Sunday in a show down of two contrasting styles as the Falcons will look to air it out to Julio Jones and ground and pound with Devonta Freeman while the Broncos defense has been their pride and joy but they too can can move the ball with the best of them. The Falcons absolute thrashed the Panthers last weekend as Jones went off for 300 receiving yards and a score as the Falcons have established themselves as one of the teams to beat in the NFC and a win here would cement that status against the defending champions. The Falcons defense hasn’t been great but they should see a rookie quarterback here in Paxton Lynch and if they can stack the box and keep CJ Anderson in check they will force Lynch to beat them through the air.

The Broncos meanwhile continue to get knocked by the odds makers and this one is no different as the line has dropped from 6.5 down to 4.5 as the sharp money is coming in hard on the Dirty Birds and perhaps for good reason. The Broncos have yet to face an offense that is playing as well as Atlanta’s is but the Falcons have yet to see a defense as potent and ferocious as Denver’s and the matchup between the two has many thinking it will be a field goal type game. However, the Broncos should be able to take advantage of the soft Atlanta defense and even if Lynch plays more of a game manager role in this one he is still capable of using Demaryius Thomas, Emmanuel Sanders, and Anderson to his advantage and but the Broncos in a position to win the game and get the cover.

The pick in this article is the opinion of the writer, not a Sports Chat Place site consensus.
Previous Pick
BC Lions vs. Winnipeg Blue Bombers CFL Pick, Odds, Prediction - 10/8/16
Next Pick
Dallas Cowboys vs. Cincinnati Bengals - 10/9/16 NFL Pick, Odds, and Prediction