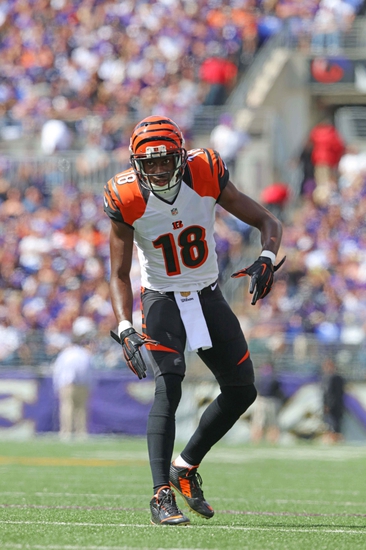 The Cincinnati Bengals travel to AT&T Stadium to take on the Dallas Cowboys in week 5 NFL action.

The Cincinnati Bengals defeated the Miami Dolphins by a score of 22-7 on Thursday Night Football to improve to 2-2. Cincy scored 19 unanswered points behind Andy Dalton who completed 22 of his 31 pass attempts for 296 yards and a touchdown. Jeremy Hill saw the bulk of the workload for the Bengals, carrying the ball 21 times for 71 yards. A.J. Green was up to his normal tricks, catching 10 balls for 173 yards and a touchdown. It was a strong defensive showing for the Bengals, as they allowed a mere 222 yards of total offense to the Dolphins as they pitched a shutout over the last 54:04. It didn’t hurt that Cincinnati also registered 4 sacks as a team courtesy of Geno Atkins, Will Clarke and a pair from Carlos Dunlap who also forced a fumble that was recovered by Domata Peko to go along with a Chris Lewis-Harris 4th quarter pick of Miami QB Ryan Tannehill.

The Dallas Cowboys improved to 3-1 with a 24-17 road victory over the San Francisco 49ers. Dak Prescott completed 23 of his 32 pass attempts for 245 yards and a pair of touchdowns. Although 7 different Cowboys had a carry for the Dallas ground attack, it was Ezekiel Elliott who had his second consecutive monster outing, logging 138 yards and a touchdown on 23 carries. Cole Beasley led Dallas with 66 yards on 3 receptions and Jason Witten logged 7 catches for 47 yards while Terrance Williams and Brice Butler each recorded a touchdown as Dallas played this game without star receiver Dez Bryant who was ruled out with a knee injury. Defensively, Dallas held the Niners to 295 yards of total offense in addition to a Morris Claiborne interception of San Fran QB Blaine Gabbert and a sack recorded by Tyrone Crawford.

This is a hard game to call as we never know what we are going to get with the Bengals, but Cincy will be a big step up in competition compared to San Fran in week 4 for the Cowboys. That said, I’ll back what I’ve seen from the Cowboys who will be searching for their fourth straight win. Add in the fact that we are getting points with Dallas at home and I’m sold. AT&T Stadium is still a tough place to go on the road and win regardless of who the Cowboys suit up.

Give me Dallas and the points.