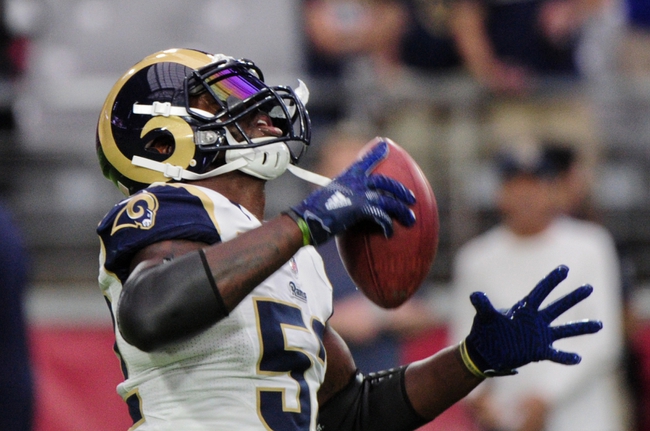 The Los Angeles Rams and the Buffalo Bills face off on Sunday in week 5 NFL action.

The Los Angeles Rams are one of the early surprise teams in the NFL this season as they sit at 3-1. The Rams offense is averaging a 30th ranked 15.8 points and 32nd ranked 269 yards per game and they have a plus 4 turnover ratio. Los Angeles QB Case Keenum has completed 55.4 percent of his passes with 4 touchdowns and 3 interceptions. The Rams rushing attack is paced by Todd Gurley who has rushed for 216 yards and 2 touchdowns and Kenny Britt has 18 receptions and Tavon Austin has 16 receptions. Defensively the Rams are allowing 19 points and 379.5 yards per game with 4 interceptions, 7 sacks, and 7 fumble recoveries. Alec Ogletree leads L.A. in tackles with 36, Mark Barron has 29 tackles, and Lamarcus Joyner has 25 tackles. The Rams offense hasn’t always been effective but they aren’t making the mistakes which allowing their defense to carry them.

The Buffalo Bills are 2-2 this season and they are coming off of a big road win at New England against the Patriots. The Bills offense is averaging 21.8 points and 307 yards per game and they are plus 6 in turnover ratio. Buffalo QB Tyrod Taylor has completed 63.8 percent of his passes with 4 touchdowns and 2 interceptions and he has rushed for 140 yards. LeSean McCoy leads the Bills rushing attack with 297 yards and 3 touchdowns and he has 17 receptions while Robert Woods leads the team in receptions with 18. The Buffalo defense is allowing 17 points and 356.5 yards per game with 4 interceptions, 5 fumble recoveries, and 13 sacks. Zach Brown is the top Bills tackler with 52, Preston Brown has 37 tackles, and Lorenzo Alexander and Jerry Hughes have 4 sacks each. The Bills are struggling in the passing game but the defense is holding up and they aren’t turning the ball over.

Both of these teams are carried by their defenses and neither turns the ball over much but I see the bills just having more offensive talent while the Rams might be slightly better on defense. I see the Bills defense being good enough here and the offense doing just enough as well so I will take the Bills and the points but really this pick is a lean at best.