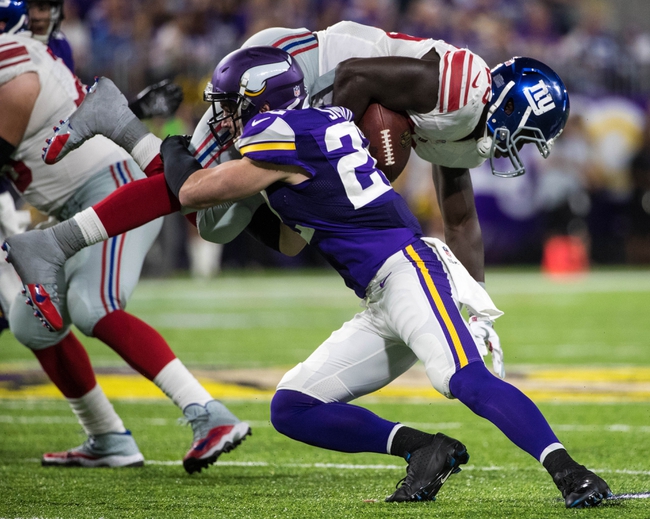 The Minnesota Vikings and the Houston Texans face off on Sunday in Week 5 NFL action.

The Minnesota Vikings are one of the last unbeaten teams in the NFL this season as they sit at 4-0. The Vikings offense is averaging 22 points and a 31st ranked 290.5 yards per game and they are plus 10 in turnover ratio. Minnesota QB Sam Bradford has completed 69.5 percent of his passes with 4 touchdowns and no interceptions. With Adrian Peterson sidelined it has been Jerrick McKinnon averaging 3.7 yards per carry while Stefon Diggs is the top receiver with 25 catches and Kyle Rudolph has 19 catches and 3 touchdowns. Defensively the Vikings are 2nd in the NFL in points allowed per game at 12.5 and 7th in yards allowed at 306 per game with 6 interceptions, 5 fumble recoveries, and 15 sacks. Harrison Smith and Eric Kendricks are tied for the Minnesota team lead in tackles with 31 each and Andrew Sendejo has 27. The Vikings don’t make a lot of mistakes and as is the usual in the NFL if a team has a big positive turnover ratio it means a winning record.

The Houston Texans are 3-1 this season and they are coming off of a 7-point win over the Tennessee Titans. The Texans offense has left a lot to be desired averaging a 29th ranked 17.2 points per game and 334.5 yards per game and they have a minus 3 turnover ratio. Houston QB Brock Osweiler has completed 61.6 percent of his passes with 5 touchdowns and 6 interceptions as he has yet to prove he is worth what he was paid signing as a free agent. Lamar Miller is the Texans leading rusher with 351 yards while Will Fuller is the top receiver with 19 catches and 2 touchdowns and DeAndre Hopkins has 17 catches and 2 touchdowns. The Houston defense is allowing 18.2 points and a 5th best in the NFL 287.8 yards per game with 2 interceptions, 4 fumble recoveries, and 11 sacks. Benardrick McKinney is the Texans top tackler with 38, Kareem Jackson has 21 tackles, and Quintin Demps and John SImon have 18 tackles each. The Texans are playing the rest of the season without their best player, J.J. Watt.

The total in this one is set at 40 and I can see it coming in under that number as these teams are both defense first so drives sputtering out and ending in field goal attempts should happen often.