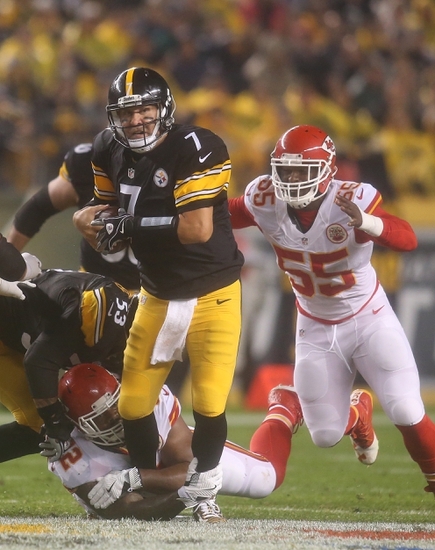 The New York Jets travel to Heinz Field to take on the Pittsburgh Steelers in week 5 NFL action.

The New York Jets fell to 1-3 following a 27-17 defeat at the hands of the Seattle Seahawks. Ryan Fitzpatrick followed up his 6 interception performance in week 3 with 261 yards and a touchdown on 23 of 41 passing, however Fitzpatrick compounded all of that with another 3 interceptions, bringing his total on the season to 10 through 4 weeks, equal to or more than the total for 12 other quarterbacks in the entire 2015 season.. The Seattle run defense reared it’s terrifying head again, holding the Jets to 58 yards on 20 carries as a team, being led by Matt Forte who logged 27 yards on 14 carries. Brandon Marshall caught 4 passes for 89 yards and a touchdown, while Bilal Powell added 6 receptions for 54 yards out of the backfield to go along with his 26 yards on 4 carries. The Jets were unable to take advantage of a less than 100% Russell Wilson, as Wilson threw for over 300 yards and 3 touchdowns on the Jets defense that was able to sack Wilson only twice on the day, courtesy of Buster Skrine and Leonard Williams.

The Pittsburgh Steelers improved to 3-1 to lead the AFC North with a 43-14 dismantling of the Kansas City Chiefs on Sunday Night Football. Ben Roethlisberger shined in the bright lights of primetime, completing 22 of his 27 pass attempts for 300 yards and 5 touchdowns. LeVeon Bell had a monster game returning from his three-game suspension, logging 144 yards on 18 carries and while backup DeAngelo Williams had his workload scaled as expected, that didn’t stop Williams from getting on the scoresheet, logging a garbage time 4th quarter touchdown to give Pittsburgh a whopping 43-7 lead. Sammie Coates led the Steelers with 6 receptions for 79 yards, while Antonio Brown logged 4 catches for 64 yards and a pair of touchdowns to bring his total to 4 scores on the young season. The Steelers used 4 team sacks from Vince Williams and 3 from Cameron Heyward and a forced fumble from Stephon Tuitt that was recovered by Ross Cockrell to hold the Chiefs to 357 yards of total offense en route to the victory.

The Steelers just destroyed a pretty good Chiefs team and now get to feast on a Jets team that is a complete mess and a shell of the playoff team that we saw last season. The Jets are on my auto-fade list until further notice making the Steelers the only play here in my opinion.