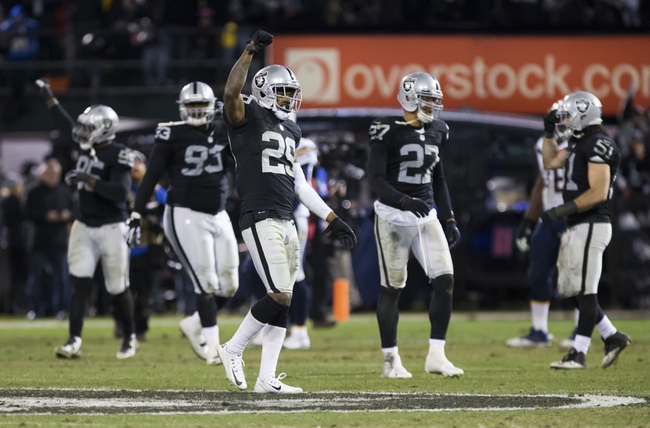 The Oakland Raiders and the San Diego Chargers face off on Sunday in a week 5 NFL AFC West battle.

The Oakland Raiders are 3-1 this season and they are coming off of an exciting road in in Baltimore over the Ravens. The Raiders offense is averaging 27 points and a 3rd ranked 392.2 yards per game with a plus four turnover ratio. Oakland QB Derek Carr has completed 68 percent of his passes with 9 touchdowns and just 1 interception. Latavius Murray leads the Raiders ground attack with 172 yards and 3 touchdowns and Michael Crabtree is the top receiver with 26 receptions and 4 touchdowns and Amari Cooper has 20 receptions. The Oakland defense is allowing 26.5 points and a NFL worst 460 yards per game with 3 interceptions, 6 fumble recoveries, and 5 sacks. Reggie Nelson leads the Raiders with 31 tackles, Malcolm Smith has 25 tackles, and Cory James has 24 tackles. The Raiders offense has been carrying them but the defense is going to have to step it up if they hope to be a contender late in the season.

The San Diego Chargers are 1-3 this season and they are coming off of a devastating home loss to the New Orleans Saints where they fumbled away a 13-point lead in the final minutes of the game. The Chargers offense is averaging 30.2 points and 360.8 yards per game and they have a plus one turnover ratio. San Diego QB Phillip Rivers has completed 67.6 percent of his passes with 7 touchdowns and one interception. Melvin Gordon is the Chargers top rusher with 230 yards and 6 touchdowns and Travis Benjamin is the top receiver with 21 catches and 2 touchdowns and Tyrell Williams has 16 catches. The San Diego defense is allowing 27 points and 371.5 yards per game with 6 interceptions, 3 fumble recoveries, and 9 sacks. Jatavis Brown and Denzel Perryman lead the Chargers defense with 22 tackles each and Brandon Flowers ahs 19 tackles. The Chargers appear to be their own worst enemies as they have the talent to win games but they seem to get in the way of that happening.

This one has all of the makings of a shootout and the type of game where the last team with the ball wins so while I don’t love this one I see having the points in our back pocket a good place to start so I will take the Chargers.